After a restless early life, in 1953 artist Ian Fairweather (1891-1974) consolidated his home and art in a hut on Bribie Island, in Brisbane’s Moreton Bay. The following 20 years saw Fairweather achieve the summation of his life’s work as a painter and the works from this period brought him enduring fame. The Gallery's intimate exhibition ‘Ian Fairweather: Late Works 1953-74’ in 2012 focused entirely on the radiant works he created in this period.

Working in his hut, Fairweather transformed his immediate surroundings and his memories into complex, layered works, remarkable in their light, colour and vision. These works convey the settled, almost comfortable state he’d achieved on Bribie, as well as some of his lingering anxieties and their disquieting effects; Fairweather’s past recurred in his works, with images and experiences haunting his compositions.

Despite the enduring appeal of his earlier works, these later works define Ian Fairweather’s place in Australian art history. The gift of 13 such works, donated through the Josephine Ulrick and Win Schubert Foundation for the Arts, represents the apogee of Win Schubert’s steadfast and extraordinary program of benefaction. These works have transformed the Gallery’s holdings of the artist’s work.

The landscape Pumicestone Passage 1957 is among the few paintings Fairweather made in Queensland that depicted a specific place. Even so, the Glasshouse Mountains - which can be seen in the distance from the site of the artist’s hut on Bribie Island - are shown with only a token of topographical accuracy. Depicting the channel that separates Bribie Island from the mainland, the pale, chalky colour scheme recalls some of Fairweather’s Chinese paintings of the 1930s, with their fresco-inspired palette. Other works may have been inspired by local sites and events: the interest in the movement and dynamism of horses seen in Trotting race 1956 may have been inspired by a visit to Brisbane, where harness racing had been popular for many years. First exhibited at the Macquarie Galleries in Sydney in 1957, the painting is from a series created in 1955-56, in which Fairweather combined human and animal figures, embodying movement and energy. He returned repeatedly to the subject of horses: in Chinese culture, the steppe horses depicted in Tang-dynasty (618-907AD) pottery evoked freedom and power. The bright, ultramarine pigment has been identified as ‘Reckitt’s blue’, a cheap and easily obtained colour once used as a laundry-whitening agent.

The progressive stylisation and abstraction of figurative elements can be perceived in Fairweather’s works from the 1930s onwards, but his venture into non-objective abstraction began in late 1958, reaching its peak with an exhibition held at the Macquarie Galleries in 1962, in which Composition I 1961 was included. This was a major break from the works being produced by other prominent Australian painters of the time, such as Russell Drysdale, Arthur Boyd and Sidney Nolan. Fairweather himself seemed equivocal about the pictures, writing that ‘they really refer (mostly) to nothing in particular - sort of soliloquies I suppose will have to come under the heading of abstracts’.(1)

Aspects of Fairweather’s art at this time were drawn from his past life in China and his abiding enthusiasm for its language and culture. He had developed this interest when he was a prisoner of war during World War One and had later travelled to China, where he worked, painted and learned Mandarin. This passion, and the influence of the linear grace of the Chinese art of calligraphy, is discernible throughout the rest of his life and works. Fairweather signed paintings he thought to be particularly successful with the Chinese characters meaning ‘auspicious’.

An important episode during Fairweather’s Bribie Island years was his translation of the The Drunken Buddha, which honoured his time in China and his respect for the country’s intellectual tradition. Fairweather completed the laborious task of the translation by dictionary, by the light of a hurricane lamp. Two paintings included in the exhibition relate to The Drunken Buddha, which was published by the University of Queensland Press in 1965 and illustrated by 12 of Fairweather’s paintings: one of these is the Gallery’s Chi-tien drunk - carried home 1964, accompanied by the playful Chi-tien stands on his head 1964, from the collection of the University of Queensland. The novel, based on a story well known in China, follows the life of the monk Tao-chi (1148-1209), also known as Chi-tien, who was renowned for his unorthodox behaviour. Both works have the wavering border which is so characteristic of Fairweather’s works throughout the last two decades of his life, and become a feature of his series of abstractions.

A sense of Fairweather’s daily routine can be glimpsed in Bus stop 1965, in which passengers quizzically peer out at the world. First exhibited in the Easter exhibition of 1966 at Sydney’s Macquarie Galleries, writer Murray Bail described the work as ‘an exploration of relationships and a comment on an everyday but ritualised event’.(2) In a note of 15 March 1965, Fairweather commented that ‘the bus (Stop) is part of the landscape as seen from the beach outside the grocery over my daily bottle of milk’.(3) For an ostensibly secluded artist, and one who fulfils the popular stereotype of solitary genius, Fairweather was remarkably communicative, as can be seen in his letters. His correspondence is filled with observations of daily life on Bribie, even with his complaints, suspicions and paranoias.

Row of figures c.1970-71, from the collection of the Queensland University of Technology, is one of the last paintings that Fairweather worked on before his health started to fail in early 1971. The work was still unfinished at the time of his death in 1974, though it was the most complete among the paintings found in his hut. This work is a highlight of his last few years, when many of his paintings appeared unresolved. Fairweather’s calligraphic line dominates the painting, fluid but assured. 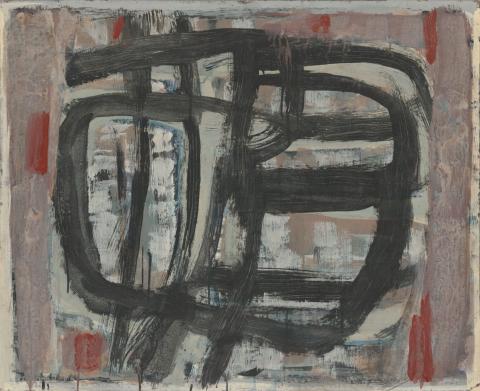 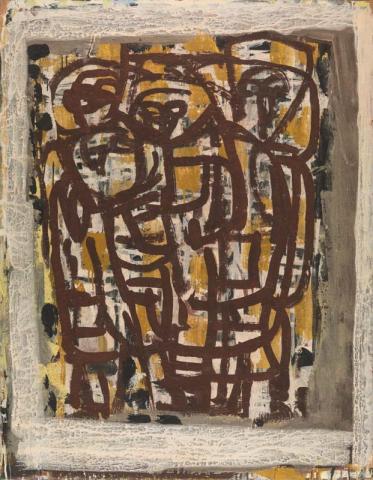 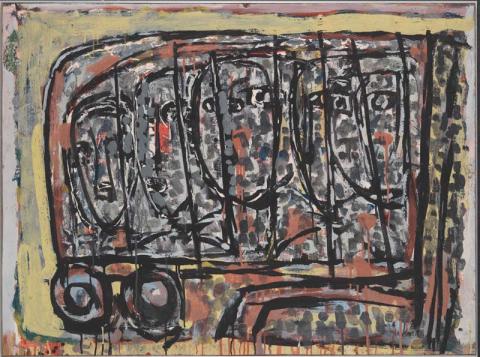 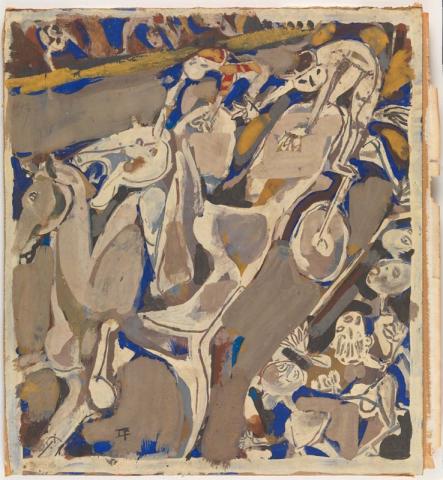 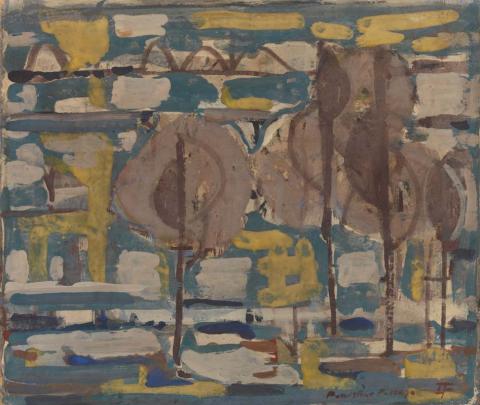