Rah Fizelle was a pioneer of abstract art in Sydney during the 1930s and 40s, and Construction II is an important part of the Gallery's Australian modernist holdings. It joins works by artists such as André Lhote, Grace Crowley, Anne Dangar and Dorrit Black, and rounds out the story of French influences on the modernist movement in this country.

After a period of study and travel in Europe between 1927 and 1931, Fizelle returned to Sydney, where he became a leading teacher of Modernism in Australia. From late 1932 to late 1937, with Grace Crowley, he ran the Crowley-Fizelle School at 215a George Street. Through their promotion of modern art and, in particular, the principles of Cubism, they influenced many artists in Sydney. A gifted teacher, Fizelle was also close friends with Sydney modernists Ralph Balson and Frank and Margel Hinder. From 1937, all these artists, together with Eleonore Lange (a German-born sculptor and academic who had lectured regularly on modern art at the Crowley-Fizelle School) had begun planning a major manifesto exhibition of their work, which culminated in ‘Exhibition 1: Paintings and Sculptures’, opened by HV Evatt at the David Jones Art Gallery, Sydney, in August 1939. In addition to the core group, the exhibition also featured works by Frank Medworth, Lyndon Dadswell and Gerald Lewers.

Rah Fizelle’s embrace of cubist methods is evident in Construction II, with its systematic arrangement of warm and cool tones across geometric planes, exploring the general scheme of the figure of a seated woman (Fizelle’s most important paintings of the period are cubist-inspired half-figures of women). The composition owes much to Crowley’s influence, whose studies in France under André Lhote and Albert Gleizes had influenced her in turn. Fizelle was sufficiently impressed by Gleizes’s ideas to ask to become his pupil at Moly-Sabata, and while nothing came of this, Gleizes acknowledged the interest of Crowley’s circle by boasting in 1940 that his group’s influence extended ‘even as far as Australia’.(1)

Construction II makes a marvellous comparison with Anne Dangar’s glazed ceramic panel La Vierge et l’enfant Jésu 1934. Both represent figures in flat planes of colour, and in rotated, disc-like formations. These similarities owe much to Anne Dangar’s extensive correspondence with Crowley, which included lessons that explained Gleizes’s teachings on the compositional system of translation and rotation based on dynamic overlays of diagonal planes; a system then taught at the Crowley-Fizelle School.(2)

This sophisticated and dynamic work by Rah Fizelle is the first major oil painting by this important Australian modernist to be acquired by the Gallery. It makes an outstanding addition to the fine group of modernist works already in the Collection. 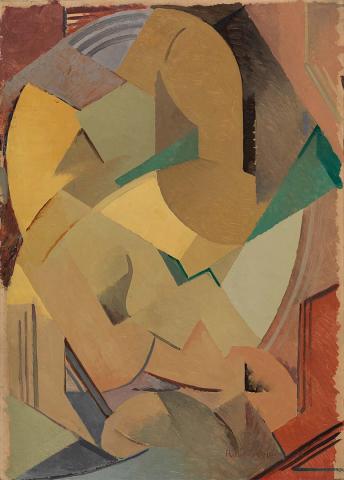 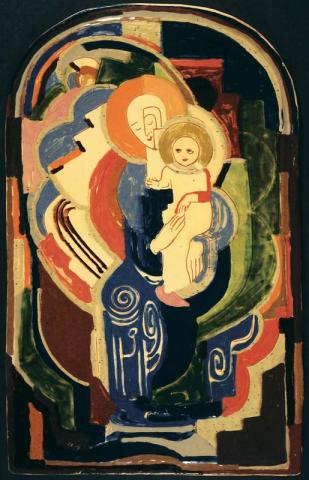