Zilvinas Kempinas is a leading figure in contemporary Lithuanian art and represented the country at the 53rd Venice Biennale in 2009. Kempinas is renowned for producing beguiling and at times monumental works with distinctly modest means. Since the early 2000s, the defining material of his oeuvre has been unspooled magnetic video tape, which the artist recycles in surprising forms. Discussing his interest in the tape, Kempinas has stated:

'I am attracted to things that are capable of transcending their own banality and materiality to become something else, something more. I like the way that videotape is simultaneously delicate and durable, since it’s meant to last. I can rip it easily with my hands because it’s so thin, but I can also stretch it. Videotape is made to present the world in color, but it appears purely black. It’s supposed to be this safe container of the past, but it is destined to vanish like a dinosaur, to become obsolete, pushed away by new technologies. It’s a familiar mass-produced commodity, but it can be surprisingly sensual and can look almost alive if set in motion. It can be seen as a solid, thick, black line, but it can also disappear right in front of your eyes if it’s turned on its side.'(1)

Columns 2006 is a group of tall, hollow cylinders made from lengths of video tape that extend from the floor to the ceiling, arranged in a grid formation. When the edge of the video tape facing out towards the viewer, the columns are barely perceptible, creating a compelling visual effect. As art critic Mark Rapolt described in a review of the work, ‘the columns - ironically, given that they are in effect stilled or frozen films - appear to be animated line drawings [. . .] the effects of ‘light’ and ‘shade’ fluctuate as you move around the installation.(2) Roberta Smith, art critic for the New York Times, characterised the work as a series of vertical lines whose thickness constantly fluctuates to create ‘dazzling optical effects’.(3) 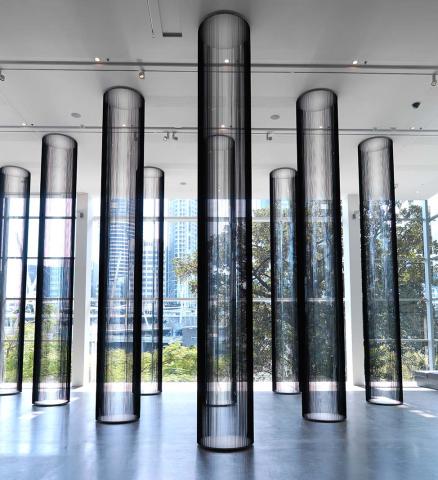