With the generous support of James C. Sourris AM, the Gallery has recently purchased a major work by Normana Wight. Angela Goddard reports.

Normana Wight was born in Melbourne, first studying painting at the Royal Melbourne Institute of Technology. In 1962, she travelled to Europe and studied printmaking at the London Central School of Arts and Crafts, returning to Melbourne in 1967 to teach art history, painting and, eventually, printmaking at the Preston Institute of Technology. Wight moved to Queensland in the 1980s and taught for many years at the University of Southern Queensland, Toowoomba. She currently lives and works in Brisbane.

Wight was one of just three women artists to have work included in ‘The Field’, an important exhibition of contemporary Australian art at the National Gallery of Victoria, Melbourne, in 1968. Untitled Yellow-Green 1970 is the only major surviving piece of Wight’s from this period. It complements works from the time already in the Collection, by artists such as Robert Hunter, Peter Booth, Trevor Vickers, Tony McGillick and Dale Hickey, and joins Janet Dawson’s Coffee table c.1964, a 2010 acquisition donated by James Mollison AO adding to the Collection’s significant works of the period by women artists.

Untitled Yellow-Green is a large and commanding work, over five metres long and made up of six canvases, with radiating curved bands of colour that move from a cool green to a warm yellow and back again. In its uncompromising geometry and eccentric shape, the work is typical of the formal experimentation seen in painting from this period. The shape and composition of Untitled Yellow-Green 1970 recalls Wight’s painting in ‘The Field’, Untitled 1968, which hung vertically rather than horizontally (and which the artist destroyed in the 1970s — though the Art Gallery of New South Wales has a study for the work in its collection).

This modular work is not a painting but rather a screenprint on canvas, making the connection to Wight’s subsequent printmaking practice and the medium for which she is today best known. The use of screenprinting ink has made the canvas looked soaked or stained, giving it a matt texture and amplifying the intensity of its colours. The fact that Untitled Yellow-Green is a print rather than a painting — and therefore is theoretically a multiple, as well as being modular and reconfigurable — could be seen as subverting the primacy of the medium of oil on canvas, an idea that was both celebrated and critiqued in ‘The Field’. The work resonates strongly with the discourses that surrounded this watershed moment in Australian art in the postwar period, when artists became interested in the dematerialisation of art itself, and conceptual art that rejected the commercial gallery system. These ideas also carried into Wight’s ‘Postcards’ project from 1974, for which she distributed small editions of prints through the post.

The Gallery has been collecting Normana Wight’s work since 1976, and this major early painting greatly enhances the representation of the works of this Brisbane-based artist in the Collection, strengthening the Gallery’s holdings from the late 1960s and early 1970s. 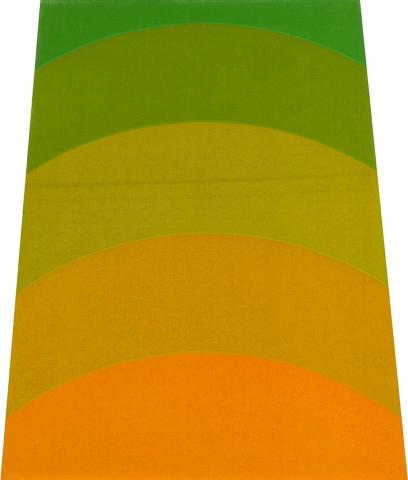