BOYD, Arthur; The lady and the unicorn (portfolio)

Arthur Boyd is celebrated for his paintings, but he is also recognised as a significant and innovative printmaker. Some of his best series were inspired by collaborations with Brisbane-born poet Peter Porter (1929–2010). Their collaborations took form in limited-edition books including Jonah (1973), The Lady and the Unicorn (1974), Narcissus (1984) and Mars (1988). His ‘Narcissus’ series (also in the Collection) explores the ancient myth - the story of a young man who adored his image reflected in a pool, so much that he languished and died. In 1986, Boyd himself gifted the series to the Gallery, in honour of Marjorie and Brian Johnstone for their fostering and support of contemporary Australian art in Brisbane in the 1950s and 60s. Acquiring the complete series of Boyd’s 24 works from The Lady and the Unicorn has made a considerable contribution to the Collection’s print holdings of this important Australian artist.

Boyd had an early practical knowledge of printmaking from his grandparents, Emma Minnie and Arthur Merric Boyd, who both produced etchings in the 1890s. There was still a small etching press in their Rosebud studio, which Boyd visited regularly and lived in from 1937 to 1939. The Boyd family was also friends with Jessie Traill, one of Australia’s most significant printmakers between the world wars, and Arthur produced etchings with her at her studio at Harkaway near Berwick in 1948–49. In 1953, he attended printmaking classes at the Melbourne Technical College (now RMIT) with Charles Blackman, who also lived near Boyd in London in the early 1960s; it was at Blackman's lodgings in Highgate that Boyd’s interest in printmaking was rekindled.(1)

The idea for the collaboration between Boyd and Peter Porter on The Lady and the Unicorn was inspired by another artist, Georges Mora. Mora had seen beautiful medieval tapestries on this theme at the Musée de Cluny in Paris and thought it an ideal subject for both art and poetry. Porter, like Boyd, was living in London when the idea was proposed via correspondence from Mora. Porter initially wrote to Boyd in the early 1970s, saying there was not a lot of detail on the story, and that he was ‘elaborating on some sources and making the rest up while bringing a sense of an ancient myth into the present’.(2) In Porter’s version of the story, the unicorn falls in love with a maiden who initially reciprocates, but grows bored. The lady ultimately betrays the unicorn to the Emperor, who desperately wants to capture the rare creature and dispatches his hunters.

In addition to the limited-edition book, Boyd produced this separate, limited edition of the works, in which he was able to ensure the subtlety of the etchings and tonal range of aquatints, exceeding the quality of the original book reproductions. These etchings reveal a mastery of arabesque line and fine detail in drawing combined with a velvety black aquatint that shifts in tone. Boyd’s ideas, stimulated by Porter’s texts, took their own shape, with the end result being two sets of unique artworks. Porter said of this collaboration that ‘the poems and pictures continue to live separate lives, but they could never have been born without each other’.(3) Featuring dreamlike compositions in interrelated scenes, Arthur Boyd created something potent in this powerful series of etchings - there is anger and anguish, but also a sense of joy and empathy. Coming after the recent substantial gift from Paul and Susan Taylor of Boyd’s Sleeping bride 1957–58, this significant suite strengthens the Gallery’s holdings of the artist's work, allowing us to more comprehensively present this narrative in Australian art history. 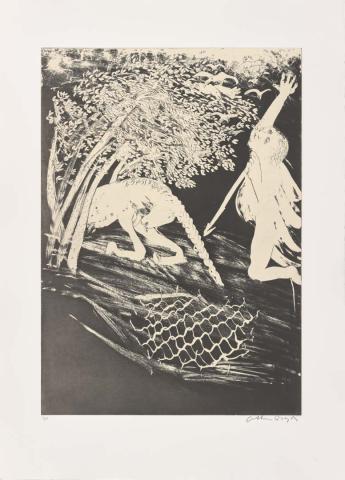 The lady and the unicorn (portfolio) 1975