Lindsay Bernard Hall (1859–1935) was an artist, teacher and director of the National Gallery of Victoria (NGV) in Melbourne from 1892 to 1933. Hall is noted for his interiors and still lifes, and some of his most accomplished works were of the female form, but his role as director (and the first Felton Bequest buyer for the NGV) largely overshadowed his achievements as an artist. He created artworks that brought high standards of aesthetic merit and craftsmanship to Melbourne's artistic community of the time.

As an artist, Hall trained in London, Antwerp and Munich, and he painted meticulously in the Munich style. A strong disciplinarian, Hall emphasised drawing and technical skills and his art displayed these qualities, though such highly finished paintings went out of fashion during his lifetime. Author Gwen Rankin notes that Hall was exhibiting more widely during the early 1920s and speculates that this may have been spurred by financial considerations or a concern to establish his status as an artist.(1) In 1921, he submitted a portrait of his wife, Grace, in the first Archibald Prize, which was later awarded to his former student, William McInnes. He entered again the following year with two paintings: the first, a conventional portrait of a friend, Sir Robert Garran; and the second, the unconventional Lady with sponge. Rankin comments that the painting ‘seems to have been calculated to disconcert the men charged with judging that year’s entries’.(2) Although its subject matter as an entry in the Archibald was unusual, the work is typical of Hall’s structured, tonal paintings — in which he worked outwards from a dark background to a middle ground — and features reflected highlights at crucial points on the carefully built-up illusory space of the canvas.

The subject — a young Scottish woman named Jean Robertson — was one of Hall’s models. In 1919, he painted her as a nun, and again in 1921 wearing a traditional Chinese costume. Rankin describes the model as having ‘two attributes that evoked the pre-Raphaelite precedent. The first was the air of brooding introspection . . . and the other was the model’s luxuriant copper-red hair’.(3) Robertson posed clothed — it was Hall’s ‘challenge in the painting . . . to devise a clothed persona on whom unbound tresses would not appear contrived’.(4) The solution was a simple study of a woman in shift and bath gown, with a towel over her arm and a large marine sponge in her hand. Light falls on her right, highlighting her long hair and the intricate, primitive structure of the sponge, giving her the appearance of a supplicant making a ritual offering. It recalls Hall’s early symbolist leanings and the influence of fin-de-siècle aestheticism.

The Collection already holds a significant symbolist work by Hall — The quest c.1905 — of which the artist painted two large versions (the other is held in the NGV collection). The work was inspired by the mystic Persian poetry of ‘The Rubaiyat’ of Omar Khayyam (first published in English in 1859). The symbolists believed that art should represent absolute truths that could only be described indirectly. They wrote and painted metaphorically, endowing images or objects with symbolic meaning. Dreamlike and evocative of mystery, fantasy and the exotic, works were often inspired by biblical or mythological stories. Lady with sponge is redolent of such interpretation: dipped in vinegar, a sponge was offered to Christ from which to drink during Crucifixion.(5) Bathing has additional associations with purification and the ritual of washing and anointing a body after death.

A Collection work by George Lambert, Self portrait with Ambrose Patterson, Amy Lambert and Hugh Ramsay c.1901–03, comes from this tradition. Lady with sponge could be successfully displayed with this work and other Australian symbolist paintings in the Collection, including Sydney Long’s Spirit of the Plains 1897, Arthur Loureiro’s Study for The spirit of the new moon 1888, and Rupert Bunny’s Una and the fauns c.1890. Lady with sponge also has parallels to the biblical story of Susannah, a Jewish heroine falsely accused of adultery while at her bath. Daphne Mayo’s sculpture Susannah 1946, cast 1995, explores this theme, depicting the subject as a model of virtue, resolute and defiant on discovering she is being watched while taking her daily bath. Hall’s figure has a similar resolved demeanour and strength of character.

Lady with sponge is a particularly fine example of Bernard Hall’s tonal realism, from the height of one of his most productive periods. 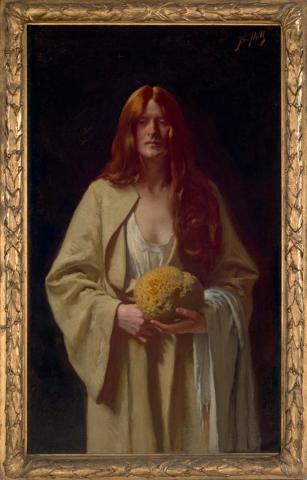