Papua New Guinean artist Simon Gende is known for his insightful and often humorous commentary on international events and icons. Working with saturated colour and stylised or silhouetted figures, Gende lifts subjects as diverse as Papua-based Australian kiaps, the 9/11 attacks on the World Trade Center in New York and the story of Diana, Princess of Wales, from the television screen and the pages of print media, and presents them in an alternative, PNG-infused universe.

Leadership tussle in Australia: Rudd v Gillard documents the Australian Labor Party’s leadership battle of 2010 that resulted in then prime minister Kevin Rudd losing the support of his party and resigning. Then deputy prime minister Julia Gillard was subsequently elected by the party unopposed and led them to an historic federal election, which saw the first hung parliament in 70 years. Gillard was able to form a minority government by uniting forces with a Green MP and three independents, but her term as the twenty-seventh Australian prime minister, and the first Australian female prime minister, was brought to a stunning close in June 2013, when voting members of the Labor caucus, once again on the eve of an election, chose to withdraw their support. Rising from the back benches, Kevin Rudd resumed his place as leader of the Labor Party and prime minister of Australia. Labor subsequently lost the election.

Gende's painting is both a document and a prophecy. Silhouetted against a raging orange sky, the two figures, each dressed in the full regalia of a Papua New Guinean Highland chief, battle out their political future. Gende strips back the political machinations and diplomatic dressing up given to such events, reinstating its performative drama and very real consequences of losing. With an incisive flourish, Gende comments on both Rudd’s and Gillard’s claims to having the best interests of the Australian people at heart by giving them each a shield decorated with the Australian flag. The patterning traditionally used on Highland shields relates directly to the person carrying the shield, identifying them as being from a particular cultural group. Often visually arresting, these patterns are intended to assert strength and to act as visual distractions in battle. The shields carried by Gende’s Rudd and Gillard carry the same bright patterns, indicating that these opponents are, rather tragically, from the same place. Instead of asserting the strength of this place, they suggest division and instability: the shields appear somewhat ridiculous, closely resembling the ubiquitous rubber thong and crassly decorated with nationalistic designs - perhaps a wry comment on the state of Australian politics.

Leadership tussle in Australia: Rudd v Gillard was painted while Papua New Guinea was enduring its own epic leadership battles. Leading up to the federal election in July 2012, the nation’s founding father, Sepik man Sir Michael Somare, had become embroiled in a bitter legal and political battle with Highlander Peter O’Neill. Gende’s painting would have made an interesting accompanying image for the many commentaries about 'big man syndrome’ in PNG politics that appeared in the Australian media at the time.

Simon Gende’s painting humorously engages in commentary about the contemporary moment. Bold, perceptive and engaging, Leadership tussle in Australia: Rudd v Gillard asserts the presence and relevance of a Papua New Guinean way of seeing and reporting on what happens in our world. 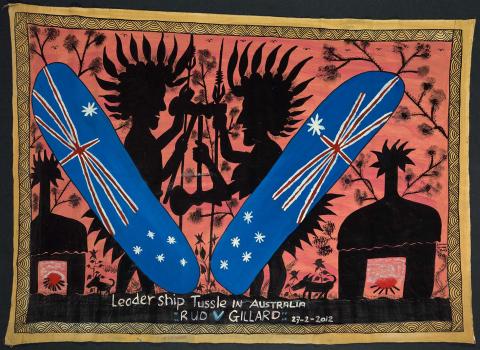