When Angelica Kauffman (1741–1807) arrived in London in June 1766, the city was a teeming urban centre of commerce and culture. Theatres, coffee houses, literary clubs, picture dealers, print and book shops, and a flourishing publishing industry of novels, plays and periodicals, had transformed London into a seat of power and cultural influence broader and more nuanced than the mannered domesticity of the eighteenth-century royal court. The fine arts occupied an important position within this commercial domain of trade, power and influence.

In the first half of the eighteenth century, a burgeoning art market in Britain saw many thousands of pictures traded by private dealers and collectors, with hundreds of classical antiquities, old master paintings, etchings and engravings imported from Holland, Italy and France. Fierce competition existed among British royalty and aristocracy to acquire works by Titian, Raphael, Guercino, Rubens and van Dyck to adorn palaces and country estates. In contrast, contemporary British painting was confined largely to portraiture, landscapes and architectural decoration; in the eyes of the connoisseurs and critics, it failed to supply the edifying qualities to be found in the universal values and moral ideals of Italian or French history painting.

Formulated as a genre of painting during the Renaissance, history painting was considered the pinnacle of artistic expression. Elevated beyond other genres, such as landscape, portraiture and still life, history painting aspired to represent heroic or tragic human actions in pictorial narratives, based on biblical, mythological and classical themes and subjects, or on modern history and literature. Its purpose was to provide moral instruction and to inspire civic virtue and national pride. That such works were required for erudition, especially in literature and history, as well as for technical mastery of perspective, anatomy and life drawing, also marked history painting as the preserve of male painters.

By the 1750s, British art began to change as more English painters — guided by the discourses of the critic and painter Jonathan Richardson(1) — came to accept and incorporate notions of antiquity and grand historical narratives into their work. British painters Joshua Reynolds and Richard Wilson both returned from Italy in the mid 1750s, enriched by and conducive to the influences of Italian painting. Reynolds imbued his military and aristocratic portraits with broad allegorical, and sometimes biblical, themes borrowed from old master works he had seen in Rome, Florence and Padua.

By the time of her arrival in London at the age of 25, Angelica Kauffman had completed portraits of noblemen and celebrities — which had been sent to London in advance of her arrival in 1766, to be exhibited at the Society of Artists — and had established numerous relationships and received portrait commissions from British aristocracy in Italy on the ‘Grand Tour’. Kauffman’s introduction to London society was ensured through her association with Lady Bridget Wentworth (the wife of John Murray, British Consul in Venice) who accompanied her to England. The British art world was dominated by men such Thomas Gainsborough, Richard Wilson, George Romney and Joshua Reynolds, who were instrumental in introducing a new naturalism to portraiture while conceding to the fashion for dilettantish neo-classicism. Sitters for portraits were clad in classical costumes and draperies with props and effects to allegorise or evoke a classical subject.

Born in Switzerland, Kauffman travelled to Italy with her father (Johann Josef, also a painter) in the late 1750s, and studied in Florence, Naples, Bologna and Rome. Her talent was carefully nurtured by her father, and her early success in Europe was greatly assisted by her associations with prominent artists and intellectuals of the day, such as Goethe (1749–1832), antiquarian scholar JJ Winckelmann (1717–68) and American-born painter Benjamin West (1738–1820), who later became court painter to King George III. Kauffman’s study, and copying from works by Italian masters, had not only contributed to her reputation as a portrait painter but confirmed for the artist that history painting was her aspiration.

Brownlow Cecil, Ninth Earl of Exeter (Lord Exeter), introduced Kauffman to portrait artist Joshua Reynolds. At the time, there was increasing interest for an academy of painting with the support of royal patronage. The Royal Academy of Arts was founded in 1768, with Reynolds as its first president and Kauffman as one of two female founding members. The following year, at the Academy’s first exhibition, Kauffman exhibited four paintings, all of classical subjects. Her success in England continued throughout the 1770s, occasionally punctuated by petty scandals and art world jealousies, but bolstered by royal commissions, society portraits, decorative architectural designs and consistently favourable reviews for the history paintings she exhibited at the Royal Academy.

In 1781, Kauffman embarked on another phase of her successful career as one of the most celebrated female artists of the eighteenth century. Her father’s illness and aging prompted her return to Italy, where Kauffman married longstanding family friend and painter, Antonio Zucchi, who was 15 years her senior. In Naples and Rome, she continued to receive commissions for history paintings and portraits, including from the royal family of Naples in 1784. Following the death of her father in 1782, Zucchi increasingly assumed the role of Kauffman’s agent-manager. He kept detailed inventories of her work, including costs, fees, sizes, subjects and patrons. The record, in the archives of The Royal Academy of Arts, London, was published as a translation by Stella Vitelleschi as the ‘Memorandum of Paintings’, appearing in the appendix of Victoria Manners and GC Williamson’s Angelica Kauffmann, R.A.: Her Life and Works (1924).(2) The entry for the Queensland Art Gallery’s painting The deserted Costanza is part of a description of four oval panels, produced in Rome in 1783 for His Excellency Don Honorato Gaetani: ‘…Another similar representing Constance in the desert island whilst sculpting her adventure on a hard stone taken from Metastasio’s L’isola disabitata’.(3)

All subjects for the panels were derived from literary sources, such as Ludovico Ariosto’s (1474–1533) Orlando Furioso, Torquato Tasso’s (1544–95) epic poem Gerusalemme Liberata and his play Aminta. Metastasio (Pietro Antonio Domenico Trapassi) (1698–1782) was a popular Italian poet and highly regarded librettist; his L’isola disabitata 1753 was a successful operetta and had been performed in Madrid, Vienna and Italian cities and, in 1779, was composed as an opera by Joseph Haydn. Kauffman’s painting illustrates a scene in which Costanza, believing herself to have been abandoned by her husband, Gernando, carves an inscription on a rock with a broken sword. In fact, Gernando had been taken captive by pirates after a fight, of which the broken sword was a remnant. A translation of the inscription reads: ‘By the traitor, Gernando, Costanza is abandoned to herself in this strange land, Passing friend! If a tiger thou are not, either vindicate or commiserate my misfortunes’.

In 1987, British art historian the late Peter Tomory (1922–2008) proposed that it was the patron and commissioner of the paintings, Onorato Caetani (on behalf of his brother, Michelangelo Duca di Sermoneta), who orchestrated the suite of paintings based on the poets’ works. He suggested that the writers all had a particular relevance to the Caetani family, citing the mention of an earlier Onorato Caetani, Duca di Sermoneta (1542–92) by Tasso in his Gerusalemme Liberata (Canto XX). Metastasio regularly visited the patron’s father, Duca di Sermoneta (1685–1759), at the Palazzo Caetani and Ariosto’s poem, with its themes of immortality was a way of paying homage to the poets and their works.(4)

Angelica Kauffman is perhaps the best known of only a handful of women artists who gained recognition for their work prior to the nineteenth century. Her paintings were widely admired and distributed through mezzotints and engravings in the late eighteenth century, and she was commissioned to complete numerous decorative designs for the houses of English nobility. Kauffman stands as an artist who was at ease in her milieu, astute to business opportunities, empathetic to friends and associates, and dedicated to the art of painting.

1. Jonathan Richardson (1665–1745) was a painter and writer credited with producing some of the first art theory in England. 'An Essay on the Theory of Painting' (1715) was one of three influential essays published by Richardson, including 'An Essay on the Whole Art of Criticism as it Relates to Painting and an Argument in Behalf of the Science of the Connoisseur' (1719). 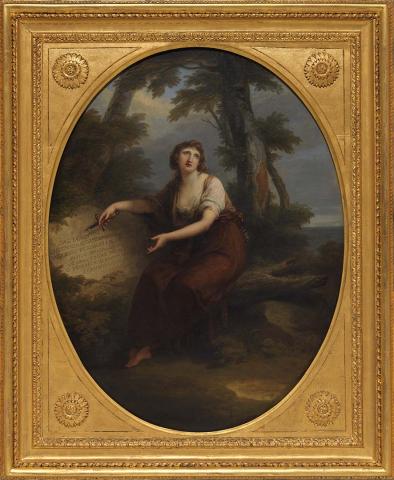