Angelica Mesiti uses performance as a means to express social ideas physically and as a mode of storytelling. She has developed a reputation in recent years for refined videos that present detailed studies of human subjects in heightened states of reverie or reflection. Using the visual language of film to depict everyday subjects, Mesiti’s poignant, thoughtful works often borrow archetypes and stylistic cues from cinema, while eschewing any tendency towards linearity. With her rich, aesthetic treatment, Mesiti seeks to uncover the transformative potential of all humans, while valuing ambiguity and indeterminacy as ends in their own right.

Citizens Band 2012 is a video ensemble that presents entrancing portraits of migrants, each performing a musical tradition from their homeland, adapted for a new environment. Played in succession across four screens, these deeply affecting chapters introduce us to four individuals. Geraldine, a Cameroonian woman, pounds the chlorinated waters of a Parisian swimming pool, her percussive beats picked out using only the dunk, cup and splash sounds created with her own two hands, a technique called akutuk (water drumming). On the Paris metro, Mohammad sings a haunting Algerian folk ballad to an audience of indifferent commuters, accompanied by the plink-plonk of his decrepit Casio keyboard. We also see Bukhchuluun, a Mongolian throat singer, playing a horse-hair fiddle on a Newtown street corner, his razor-sharp vocals vibrating on different tonal levels; and finally, Asim, a Sudanese taxi driver and Conservatorium graduate, whistling a poignant, improvised tune in his Brisbane cab. Each musician delivers a distinct sound, using a technique that is both particular and inflected with its cultural origin.

This work is essentially an expression of what Heidegger elegantly describes as ‘being-in-the-world’(1), and Mesiti’s multilayered approach uses sound and music to reflect on the complex motivations and memories we all inhabit. Her performers offer themselves to emotion, and at the same time, enact it. Each chapter is as much about presence as it is about distance, evoking nostalgia for other places, recalled in the lyrics and rhythms on screen. Citizens Band is transformative and hopeful but it is also melancholy — Mesiti’s protagonists are caught between worlds, their songs resonating with the simultaneous joy and the sorrow of migrant experience.

With her camera, Mesiti bears witness to enchanted moments of inner life. The arc of each performance, in combination with location-based imagery, cultivates for the viewer an imaginary of another place, inundating the mind and suffusing the senses. These portraits play separately until the end of the work, when the images dissolve into abstract scenography, joined by a cacophony produced when the soundtracks are layered one atop the other. The intensity of Mesiti’s ‘band’ builds through the accumulation of rhythms and sounds, flowing back and forth between inner life and social, communal space — from person to person, situation to situation, culture to culture, and from one period to the next. Her sensibility is poetic, lively and immediate, attuned to the subtle relationships between musicality, performance and the visual image. Above all else, Mesiti is alive to the nuances of her subject matter. Citizens Band acts as a memorial to memory and to the ephemeral, a valorisation of those things that are destined to disappear. 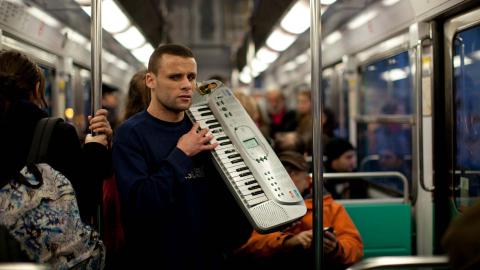