Fiona Hall’s Fly away home, a large-scale installation for children and families, was originally created to accompany the 2010 exhibition ‘21st Century: Art in the First Decade’, and was re-created on a larger scale especially for ‘Contemporary Australia: Women’ in 2012. The work invites young visitors to consider the beauty and fragility of the environment, and the place of people in the world. Many of Hall’s works feature real banknotes, and Fly away home can be considered in relation to another of her art works, Tender 2003–06, also in the Collection. For Tender, the artist shredded thousands of US dollar bills and wove them into nests resembling those of different bird species, drawing viewers’ attention to the human obsession with wealth and material possessions and its potential damage to the natural environment.

For Fly away home, paper money was specially designed by the artist with illustrations of migratory birds, and could then be used by children as the medium for their own bird species and nests. Like birds, humans often migrate to warmer and what are hoped to be safer places, and Hall’s work invited children to explore the world from a bird’s perspective. 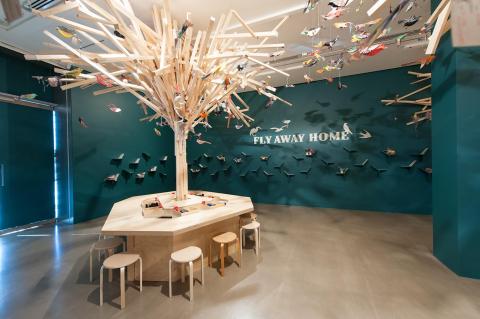