If as a colony we should indulge in wholesale murder of the race we are dispossessing, let us have the courage of our opinions and murder openly and deliberately — calling it murder, not ‘dispersal’.(1)

Outis, writing in the Queenslander, 1880

On the nineteenth-century Queensland frontier, killing Aboriginal people and driving them off their land was common colonial practice. A special police force was established to intimidate and dislocate resident Aboriginal populations through acts of violence. Even then, for many white Australians in already settled areas, the idea of wanton massacres of groups of Aboriginal people was abhorrent and legally criminal, so a new language and set of rules was invented for these practices and this police force. To ‘disperse’ became a euphemism for the murder and massacre of Aboriginal people.

Established in 1848 under instruction from Lieutenant Colonel Charles FitzRoy, the governor of New South Wales, a corps of Native Police was formed to suppress Aboriginal resistance in Queensland. This force was made up of small divisions — of one white commanding officer and a group of Aboriginal troops recruited from far-flung or rival lands — and had one purpose: to ‘disperse’ any perceived problematic Aboriginal populations by brutally suppressing Indigenous resistance to colonisation.

To those who know the history of advancing Australia (fair?), the meaning and intention of Foley’s DISPERSED is obvious: it is simultaneously a monument to the Aboriginal people killed along the frontier and an object of awakening for those unaware of this history. Foley’s work also provides an important insight into contemporary Aboriginal relationships with the police and associated figures and systems of authority. From first contact, Aboriginal people were largely seen as an impediment to progress and the police force was the agency used to ‘crush the slightest sign of resistance to colonisation’.(2) Today, despite efforts to reconcile this relationship, many Australians believe that the legal, political and justice systems that dispossessed Australia’s First People still work against Aboriginal interests.

The metal elements of this sculptural piece were forged to Foley’s specifications by Urban Art Projects, a Brisbane-based international foundry that works with artists from across Australia, and with which Foley has a long association. The ‘D’ in DISPERSED is covered in replica .303 inch cartridges, referencing the military-grade 303 rifles that the Native Police often used in their raids. Half-metre-tall letters spell the word ‘dispersed’ in a bold and simple font: each letter is made from charred wood, a reference to the burning of the bodies(4) and camps(5) of the victims of the Native Police, and the possible destruction of records relating to the Native Police,(6) in an attempt to hide the evidence of this brutal chapter in Queensland and Australian history. Each charred block is capped with a highly polished cast-metal frontispiece, shining a new light on these atrocities while metaphorically reflecting on Australian history and its impact on contemporary society, placing the viewer firmly within this dialogue.

Fiona Foley has noted two publications for providing inspiration for this work, and both extensively detail the history of frontier violence, particularly in Queensland, and the role of the Native Police: Frontier Justice: A History of the Gulf Country to 1900 (2005) by Tony Roberts and The Secret War: A True History of Queensland’s Native Police (2008) by Jonathan Richards.

3 ‘Bullymen’ is an Aboriginal and Islander Pidgin English/Creole word for ‘policemen’, particularly used in Queensland. 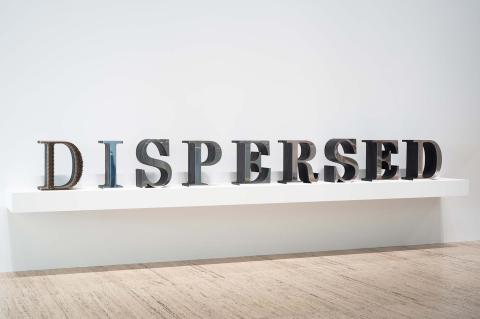