Grace Cossington Smith (1892–1984) became one of Australia’s most celebrated modernists renowned for her iconic cityscapes and luminous interiors, which she painted from the relative seclusion of her family home on Sydney’s upper North Shore. Her iridescent, meditative landscape Deep water, Bobbin Head c.1942 demonstrates her capacity to invest unassuming subjects with profound significance. Although modest in scale, the painting has great presence and epitomises her mantra that, ‘My chief interest, I think, has always been colour, but not flat crude colour — it must be colour within colour, it has to shine’.1

In characteristic style, Cossington Smith has sketched the view in broad brushstrokes, conveying a sense of the place, rather than describing it in detail. With great economy, she has defined the landforms that lead down to the waterway, alluding briefly to trees and other vegetation. The yellow hues on the lower right that signify an embankment ground the vista, while the daubs of radiating blue at the top of the composition — a device that Cossington Smith used frequently - create a feeling of expansion. What is most striking, however, is the way that she has both suggested depth and, simultaneously, flattened her picture plane. While the stippled blue-green marks that describe the pool and the painting’s overlapping forms imply recession, the variegated rectangles of warm-toned colours that define the hill in the background conversely appear to advance. The critic, gallerist and Cossington Smith scholar Bruce James has commented on this aspect of the artwork, noting ‘its brutalising compression of space and compaction of form, an effect of continents colliding’.2

The painting is one of several landscapes that feature Bobbin Head, Bayview and Roseville, respectively, which the artist exhibited in 1942 in an exhibition at Macquarie Galleries that she shared with her friend, the painter Enid Cambridge.3 The sites are all within easy reach of Cossington Smith’s home at Turramurra, Sydney. In this sense, they are as much a part of her personal history as the interiors she was known for. Along with arresting images of the Sydney Harbour Bridge under construction and St James Anglican Church, where the Smith family worshipped (including Church interior c.1941–42), the paintings are based on locales that she knew and loved.

Beyond celebrating her environs, Deep water, Bobbin Head reveals that Cossington Smith was engaged with the work of her contemporaries. There are, for instance, similarities between Cossington Smith’s painting and the monotypes of fellow modernist Margaret Preston who, from 1932, lived at Berowra just north of Turramurra. Although Preston’s prints Hawkesbury Ranges – NSW winter 1946 and Hawkesbury Bridge, NSW 1946 are stylistically different, they reveal that she was similarly captivated by nature and sought to foster an appreciation of the unique qualities of the bush and its place in Australian art.

Deep water, Bobbin Head evidently held special meaning for Cossington Smith. The artwork is a defining feature of her Interior with blue painting 1956 (National Gallery of Victoria), despite its relative size within the composition. Like the windows and doorways that the artist employed to great effect in later works, she used the painting to expand the space within her domestic scene and suggest a world beyond it. 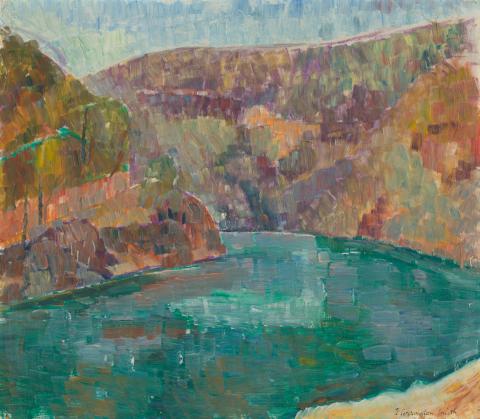