Kunmanara (Nellie) Stewart’s paintings of country, using elementary shapes and patterns executed in bold and gestural brush strokes, are becoming increasingly well-known among the outstanding artists emerging from the Anangu painting movement, one of the most exciting in the country.

This is an extraordinary story. The Anangu — Pitjantjatjara, Yankunytjatjara, and Ngaanyatjarra people who occupy the vast lands around the Northern Territory, South Australia and Western Australia border junction — initially rejected the advances of the desert art and painting movement, going so far as to threaten artists from the Hermannsburg and Papunya schools for breaking traditional laws relating to the depiction of ceremonial scenes or objects and the human figure. Today, artists from these areas have joined the painting movement, bringing with them a refreshing aesthetic that has reinvigorated painting in Central Australia.

Born in the late 1930s at Pipalyatjara, her father’s country, in the Tomkinson Ranges, South Australia, Nellie Stewart is a Pitjantjatjara woman and a senior custodian and authoritative teller of the women’s Tjukurpa (Dreaming stories) from this region, particularly the Minyma Kutjara Tjukurpa (Two Women’s Dreaming). Punu Wara 2010 is a dramatic portrayal of this story and, of this work, Stewart has noted:

'This is the story for the two sisters — Minyma Kutjara. They were separated when the younger sister was a small baby by a big wind that blew her to the south near the ocean. The elder sister found her sister … and took her back to her own country and people. In this painting the rock hole the sisters were travelling to is Punu Wara. The two sisters are at Punti.(1)

Nellie Stewart’s depiction of this story is powerful and befits a narrative of such cultural and geographical enormity — stretching from near Docker River, west of Uluru in the Northern Territory, south to the Great Australian Bight.

Stewart paints daily at Tjungu Palya art centre at Nyaparri, perhaps the most important of the newer Anangu painting centres, where she started painting in 2007 in her 70s. Stewart’s development as an artist has been rapid and she continues to push boundaries with her gestural brushstrokes creating open fields of colour punctuated by elementary shapes throughout her epic 'mind' maps.

The acquisition of this work has been made possible through the generosity of Margaret Mittelheuser AM and Cathryn Mittelheuser AM, whose support through the Queensland Art Gallery Foundation has allowed the Gallery to acquire major works by important Indigenous women artists. 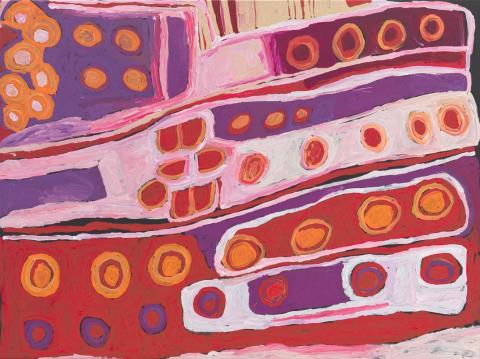