The paintings that comprise Zhao Dalu’s ‘Balcony’ series were completed in 2007, during a particularly intense period in the artist’s life. Executed in darker hues with apparent haste, the paintings depict a nude female figure seated in various poses where a wall meets a floor. Harsh light, bold shadow and the model’s apparently wind-blown hair, which obscures her face and which she seems to attempt to control with her hands in two of the images, suggest that the series was painted outdoors on the balcony indicated in the title. The surface of the works is purposefully uneven, intensely detailed in parts, flat and hazy in others, while in other areas the surface is layered and stressed to the point of raspiness. Sections of the canvas are left perfunctorily incomplete save for a few random drips, while the haphazardly cropped arm and leg of a nude male figure, possibly another model, occasionally enters the field of vision, adding to the works’ visual intrigue and disconcerting effect.

The pictorial and material drama of the series offers a marked contrast with the carefully rendered portraits and arcadian scenes of daily life for which Zhao is more widely known. Nature in ‘Balcony’ seems harsh, and the artist offers little clue as to the identity of the sitter, her face either covered in hair or shade, or turned away from the viewer. Yet the sheer physicality of her poses, as clumsy or slovenly as they might at first appear, conveys a certain dignity, and the sensuality with which the artist depicts the model’s slender fingers, splayed across the floor in an attempt support the awkward posture that weighs on her hand, is almost touching. As the artist elaborates:

'I have always been interested in the art of painting nudes. For many years, my paintings of nudes have been highly appreciated in China. In the early days, I studied traditional arts and received a very strict training in various forms of classical painting. The expressive format of my early works was often restrained and rather conservative while striving for aesthetic perfection … I was living in Melbourne in 2007 when I painted the ‘Balcony’ series. They are very different from my previous work as the style … is very confronting and raw. My composition is utterly direct but the colour palette is subjective, an expression of my emotional state at the time and my longing for freedom.'(1)

The painting of nudes was considered a radical statement by the early avant-garde in China, as it challenged state-determined prescriptions for art, and it is still a somewhat provocative subject. While the raw, expressive paintings in the ‘Balcony’ series convey a maelstrom of personal anxiety, cultural dislocation and professional frustration, they are nevertheless fine examples of an artist working to free himself from these restraints through the medium of painting. 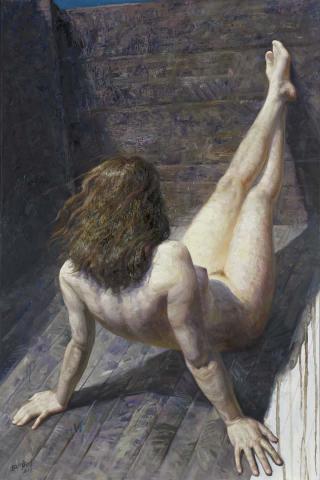 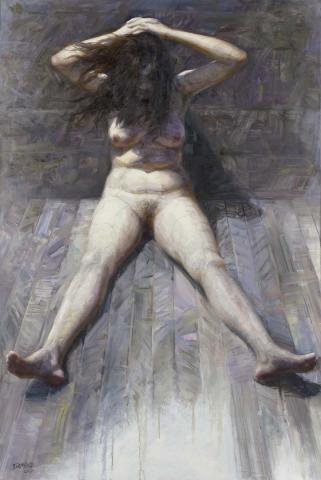 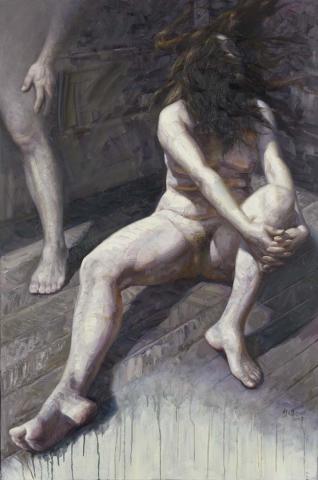