Anne Dangar (1885–1951) was an Australian artist who, despite living in France for many years, made an important contribution to the development of Modernism here. Her correspondence with Grace Crowley and other Australian artists resulted in a fertile exchange of ideas centred around modern art, especially Cubism.

Dangar, Crowley and Dorritt Black met in Sydney around 1914–15, while studying under Julian Ashton at the Sydney Art School. All three became fascinated with modern art developments in Europe and resolved to pursue further study abroad. Crowley and Dangar arrived in Paris in 1926 to study in the atelier of André Lhote (1885–1962). During the summer of 1928, Dangar, Crowley and Black attended Lhote's summer school at the southern hilltop village of Mirmande, each producing work exemplifying his classically-informed cubist style. They were also profoundly influenced by Lhote's compatriot and rival Albert Gleizes (1881–1953), who drew on the iconography of ancient cultures, including Romanesque and Celtic styles, as well as Cubism in his works. After returning to Australia briefly, Dangar spent the remaining 21 years of her life at Moly-Sabata as Gleizes's devoted disciple, implementing his theories through her ceramics, and writing often to Crowley and other Australian artists.

The ceramics by which Dangar is best known were produced in France from 1930 to 1951. This tea service, consisting of a total of 18 pieces, dating from c.1945–51, is an excellent example of her domestic ware. After the restrictions of World War Two, Dangar travelled extensively through France, which reactivated her commitment to traditional ceramic technologies. She felt that post-war reconstruction in both France and Australia, with an accompanying population increase and decentralised society, would weaken the powerbrokers of the metropolitan art world and precipitate a revival of popular arts, with the past as its inspiration. In a letter to Crowley in 1945, she wrote: ‘Australia is about to change … what Aussie needs is an art populaire — all the young to learn to express their feelings in song or dance or poem or making things.’(1)

Dangar’s home in the small artist community of Moly-Sabata at Sablons on the eastern bank of the Rhône River, with its lifestyle of manual labour in harmony with the physical and spiritual rhythms of the rural environment, was the crucible for these domestic-inspired works. Her response to the upheavals of the twentieth century was to embed herself and her work in a cultural landscape rooted in a simpler past, and these ideals were embodied in the teachings of Gleizes. Dangar professed her faith in her teacher by replicating the signs and symbols of his art in her ceramics, and the concentric circles on this rare tea service resemble the elevating motif of the spiral, an emblem of Celtic spiritual exaltation. Art historian Bruce Adams writes that ‘Her objects bearing these motifs were like heraldic shields in a crusade mounted against the modern world’s disorder and discontinuity’.(2) Here, Dangar fused modernist design principles with traditional artisanal methods to produce unique and inspired ceramic pieces such as this tea service, which was originally made for a local family in Sablons.

Tea service adds to the growing group of pieces in the Collection by Anne Dangar exploring interests in Celtic imagery, Christianity, and Modernism, representing complementary aspects of her oeuvre, each contributing to an idiosyncratic but nonetheless emphatically modernist dialogue. 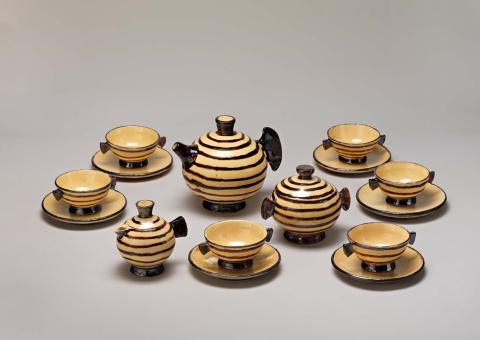