Woven and looped bags continue to be created and worn by women the world over. Used for carrying personal items and foodstuffs, nursing children, or as a form of currency, bags are an essential part of daily life. Like the clothes that we wear, they are also a tool we use to mark our place in the world. For highlander women of Papua New Guinea, the looped and netted string bag, known as a bilum, was traditionally worn as a marker of place and gender. The materials used, such as the bark of local trees, demonstrated an intricate knowledge of the local environment and the expansive form achieved by the bilum’s open weave was symbolic of a woman’s womb and the reproduction of life. Young women thus began to create and wear bilums on the advent of their womanhood. In many ways, then, the creation of bilums was more than the fulfilling of a utilitarian need; they incorporated dynamic patterns relating to specific clans that were intimately tied to the local environment.

Today, throughout Papua New Guinea and its diaspora, the wearing of bilums does not always indicate an awareness of the specificities of their origin and their intrinsic meaning. Bilums fashioned out of commercially available wools and decorated with designs inspired by new technologies are now worn across the country — by both men and women — as an everyday accessory as well as a symbol of modernity. Central to the narrative of modernity in this country is its independence, and motifs like the PNG flag form one of the most popular contemporary bilum designs. In this way, the bilum has expanded from a form that defined a specific group to one that brings together a nation of culturally diverse peoples.

Born in the Highland areas of Papua New Guinea, Cathy Kata and Florence Jaukae Kamel both learned to loop bilums at a young age. They now design innovative bilum garments, which are made by collectives of women based in Goroka who combine both traditional and commercial materials with traditional looping techniques. These garments are proudly worn by local fashionistas and increasingly by Papua New Guinea’s most celebrated models and athletes on the international stage.

A group of these garments was recently acquired by the Queensland Art Gallery, some of which feature in the exhibition ‘Threads: Contemporary Textiles and the Social Fabric’. The transformation of brightly coloured commercial wools, imported from foreign locales, into a functional textile skin imbued with social and cultural importance supports a vision of society in Papua New Guinea that is both independent and connected to the wider world. 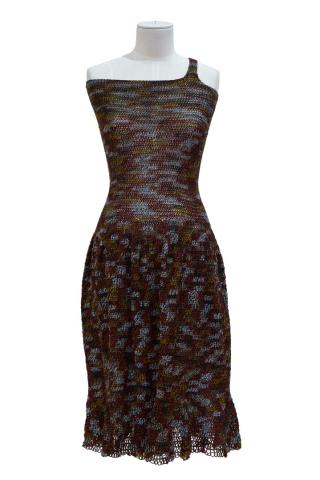