Prior to his career as an artist, Céleste Boursier-Mougenot composed music and, between 1985 and 1994, was the principal composer for Pascal Rambert’s Side One Posthume Théâtre. In discussing his move into the world of visual art, Boursier-Mougenot said he was interested in finding a context that would allow a piece of music to extend over a long period of time. Recognising that art exhibitions proposed a different relationship to time as well as to audience than musical performance, he began, around the mid 1990s, to create sound works for galleries that would evolve over the course of their ‘display’. Born in Nice, Boursier-Mougenot lives and works in Sète, a town on the Mediterranean coast in the Languedoc-Roussillon region of France.

From here to ear (v.13) 2010 was commissioned for the exhibition ‘21st Century: Art in the First Decade’ and belongs to a series of installations by Boursier-Mougenot that are at once aviaries and musical instruments. The basic elements of the installation are five hexagonal frames with harpsichord strings stretched across them, each connected to a contact microphone and audio processor. Wire coat-hangers are suspended from the strings along with food, water and nests. Sixty finches are then released into the gallery whose activities generate a constantly changing, ambient soundscape.

From here to ear (v.13) combines the technical with the aesthetic and sensorial. Boursier-Mougenot describes the installation with reference to the French term ‘dispositif’ which can be understood as a device or framework that allows visitors to engage with the work both on operational and aesthetic levels — for example one might consider the structure of the art work in the manner of a musical score or, instead, focus on the sounds being produced as one would listen to music. In an art historical context, the work can be understood in relation to the experimental sound installations and environments pioneered in the 1960s and 1970s by artists such as La Monte Young and Marian Zazeela, Bill Viola and Bruce Nauman.

Like these precedents, Boursier-Mougenot’s work creates a unique type of experience for the audience that might be thought of in terms of what composer and innovator of ambient music Brian Eno called ‘the long now’. A simple analogy is the experience of ‘live’ music with its sense of ‘being there’, in a spatial and sensory sense, which goes beyond the experience of listening. As Boursier-Mougenot underlines: ‘Live music, produced live and where we are present, is among the phenomena which have the property of amplifying our feeling of the present moment’. The artist aims for this harmony of process and effect to encourage viewers ‘to witness their own present time’.(1) 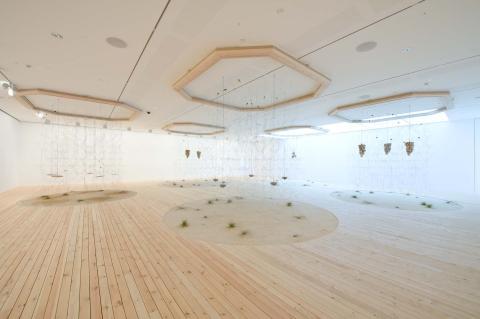