A striking pair of reverse glass paintings made for the China trade in the late nineteenth century is a welcome addition to the Gallery’s collection of objects produced for export. In an age that pre-dated popular photography, reverse glass paintings were commissioned by European and American merchants to China where their luminous and expressive qualities soon became popular with collectors. For centuries the Chinese traded with Europe along the Silk Road and its many branches to the north, however the maritime trade to the south was new in the seventeenth and eighteenth centuries, and the Chinese government feared that the Europeans may challenge, corrupt, and possibly conquer their country. In 1757, the government established a set of regulations to control the foreign maritime trade by restricting all commerce to the port city of Canton (now Guangzhou), via the Whampoa Anchorage in the Pearl River Delta.(1) In the southern part of the peninsula, there was a community of artists making works of art for the foreign clients who frequented this area.

Glass painting is not a traditional Chinese craft practice, but came about as a result of foreign influence. The reflective quality of the glass lent great depth and character to the favoured European genres of landscape and portraiture, and the medium soon prospered, alongside the high demand for Chinese commodities such as luxury goods, tea, porcelain and spices. Artists cited European engravings as well as British and American prints for inspiration and, in some cases, directly copied works with extraordinary skill.(2) Today, reverse glass paintings are sought-after objects as they mark a rare blend of Western and Chinese aesthetics that reflect the intersecting cultural and commercial exchange that characterised the China trade.

The pair of recently acquired glass paintings provides a curious insight into the socio-cultural life that took place around the Pearl River Delta. Untitled (European subject) depicts a woman and child, European in dress and pose, seated at a table examining two watches. Perhaps wanting the scene to appeal to a Western sensibility, the artist has painted the maternal figure in a style that addresses Western pictorial notions of mother and child. The image echoes the compositional style of a ‘Madonna and Child’, possibly imagined by the artist but presumably derived from a foreign print. The way the young boy is represented is interesting. Positioned on his mother’s lap and dressed in a formal suit he wears the face of an older man, perhaps a more familiar sight to the artist than that of a European infant. Using whatever models were at hand, this is a Chinese view of the foreigner, and the painting underscores the curiosity of the artists for what was outside their world.

The second of the pair, Untitled (Chinese subject) is a portrait of a maiden in a traditional Chinese dress. Her long slender fingers are pale and her face is snow-white, with Chinese facial characteristics. Our attention is drawn to her head-dress, elaborate earrings and the hair style, which appears to refer to popular fashions of the time. The artist’s use of strong colour and bold lines animate an otherwise flat perspective.

As a medium, reverse painting on glass is inherently unstable, so it is quite rare to find works that have survived over the years undamaged. Painting on the reverse of glass is a similar process to working in watercolour in that adjustments such as over-painting are almost impossible. The paint is not fused to the glass, but applied onto a transparent substrate. The artists who created these glass paintings were highly competent and demonstrate a facility with Chinese and Western techniques. They are part of a fascinating history of encounter between China and the West, between distinctive ways of thinking and seeing what is foreign, new and different. 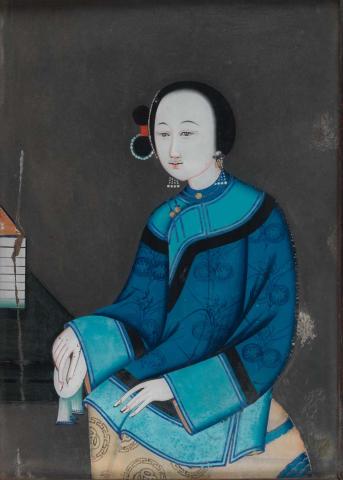 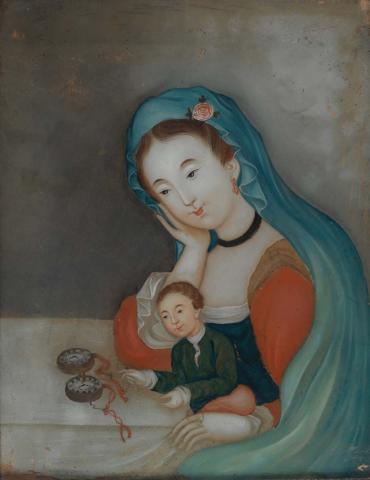