Mitra Tabrizian’s large-format photographs combine documentary photography and advertising techniques, resulting in stylised reflections of contemporary culture. Mobilised by her engagement with identity politics, and with the interweaving of subjectivity and ideology in contemporary society, Tabrizian seeks to renegotiate the significance of ordinary lives within a network of globalised consequences. The Gallery recently acquired two of Tabrizian’s works, one reflecting on dissent within the Islamic world, and the other, the effects of the global financial crisis — examples of what the artist describes as ‘the crisis of contemporary culture in both East and West’.(1)

City, London 2008 depicts a crowd of men in dark suits waiting in the lobby of the UK headquarters of leading global financial services firm JP Morgan in London’s financial district: the crowd is made up by members of the firm’s executive leadership team. The work alludes to the global economic crisis that began in 2007 and continues today, described by economic commentators as the worst financial crisis since the Great Depression of the 1930s. It caused dramatic global effects: large financial institutions have collapsed, federal governments have bailed out banks and the stock market has experienced significant drops. Tabrizian constructs this corporate tableau as a tragedy in the tradition of history painting. While the architecture suggests permanence and prosperity with its solid pillars and marble, Tabrizian’s bankers are disconnected and disorientated in their surroundings, absorbed in their own predicaments. As she has described, 'there seems to be a sense of unrest and uncertainty, no one is communicating with one another signifying the break down of "the system" in this mise en scène of power and certainty'.(2)

Born in Iran and educated in the United Kingdom, Tabrizian adopts the perspective of an outsider in her practice, observing cultures with a critical distance, which offers her the possibility of ‘belonging neither here nor there’, and providing ‘a sense of detachment as well as engagement and thus an understanding of the role of fantasy and narrative in the cultural and social processes’.(3)

Untitled 2009 was photographed on the outskirts of the Iranian capital, prior to the violent government crackdown on mass demonstrations following the disputed Iranian presidential election of June 2009. Moving to suppress opposition rallies after Mahmoud Ahmadinejad was re-elected as president, the Iranian Government instead sparked accusations (and subsequent protesting) from supporters of opposition leader Mir-Hossein Mousavi that the voting had been rigged. The government closed Tehran University — an act symbolic of the role students and universities play in Iranian public life. Tabrizian’s students appear to be exiled on the outer edges of the city, which is faint on the horizon, and, without affect in this indifferent, bleak landscape, embody the contradictory moods of isolation and defiance. They look past the viewer’s gaze towards an indeterminate future.

Mitra Tabrizian’s photographs capture her subjects, settings and iconography with meticulous attention to detail and lighting. Through these, she produces stark visages of society, its spectacle, surveillance and alienation. 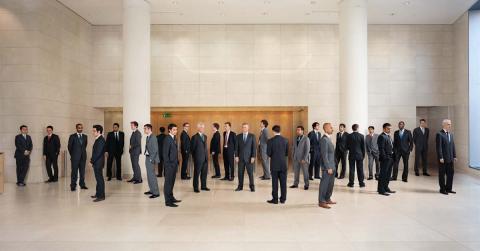