POHIO, Nathan; Landfall of a spectre

Nathan Pohio’s Landfall of a spectre 2007 is based on a lenticular print in which two or more images are combined through a specialised lens to create the illusion of 3D animation. The work focuses on a colonial ship, artfully made to pitch and roll so that viewers begin to feel the unsettling physical sensations and shifting horizons of being at sea.

In his practice Pohio consistently engages with different moving image and photographic technologies, regularly exploring transformations in meaning that can occur through the different types of viewing these technologies illicit. In Landfall of a spectre Pohio uses the early twentieth century technology of the lenticular print, with its hologram-like effects to explore early sea travel in which the traveller experiences long and uncertain periods in transit.

Watching the rhythmic, yet disabled motion of Pohio’s ship seeking landfall there is a quality of seeing images of the September 11 planes flying repeatedly into the World Trade Center’s Twin Towers in New York City. Pohio’s spectre has the same sense of something adrift, beyond control, caught in a loop of tragic repetition and plays on the sense of impending horror and the fascination this engenders. Partly through reiteration, Pohio also uses the illusory distance provided by this disembodied, moving image to draw the viewer into a potentially terrifying situation. 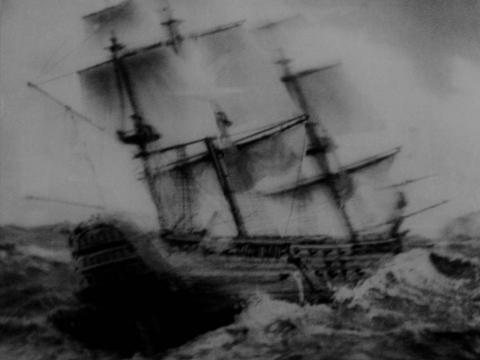