Iranian artist Parastou Forouhar is increasingly heralded as an important new face in the fields of photography and installation art. Mobilising the ornamental motifs of Persian miniatures as well as Western myths and fairytales, her work examines the way ‘identity’ and ‘reality’ are fictitiously produced.

Forouhar is renowned for creating works with a compelling, but often terrible beauty. On close inspection, her visually seductive works confront the viewer with subjects ranging from political oppression to experiences of migration. These subjects are approached via a mixture of experience and fantasy, including research into the murder of Forouhar’s own politically active parents in Tehran, 1998.

Since 2000 Forouhar has been creating photographs composed of single figures, often male, variously concealed beneath the black chador associated with Islamic women. Swanrider continues these projects by further subverting the chador motif. Here the black garment undergoes a metamorphosis, elegantly cloaking a woman — played by the artist — astride a gigantic white swan.

The importance of myth to this work is revealed in Forouhar’s choice of the town of Bad Ems on the river Lahn in Germany as the site of her performance. This town was regularly visited by Richard Wagner, one of the most ardent devotees to the values of Aryan volk (folk, people, nation) and composer of the opera Lohengrin, about a knight carried on a boat drawn by a swan. (Wagner’s works have long been tainted by an essay he wrote on the nature of race.) Forouhar appropriates Wagner’s rendition of the knight-and-swan myth, but introduces a cautionary approach to fairytales, noting their possible misuse.

A dominant motif within the work is the visual contrast between the black chador and the white swan, invoking ideas of good and evil, dark and light, as well as the known and unknown. By substituting a real swan with a pedal boat, Forouhar offers a childlike sense of adventure in relation to the unknown.

Forouhar’s ironic approach to art-making reflects on the role of storytelling and myths as well as experiences of migration and the human compulsion to order experiences according to oppositions. 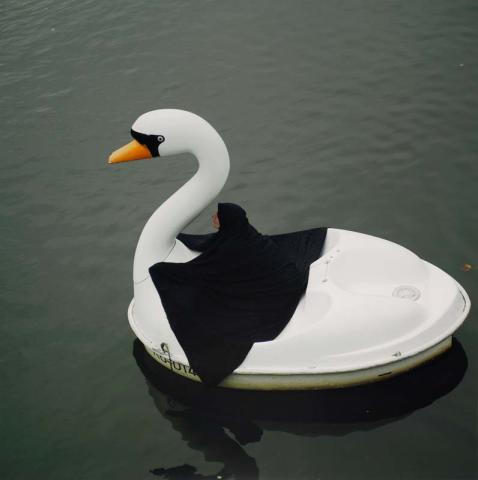