Over the past decade there has developed a growing international awareness of Tibetan contemporary art. A key figure is London-based artist and gallery director Gonkar Gyatso. Emerging in the mid 1980s as a founding artist of the Lhasa-based avant-garde group, The Sweet Tea House, Gyatso has developed a strong following for his visually compelling mixed-media drawings which incorporate reconfigurations of Buddha’s body. At times, cropped and dismembered or constructed out of layers of imagery derived from popular culture and Tibetan thangka (scroll) painting, Gyatso’s Buddhas engage with the continuing suppression of Buddhist culture in Tibet, as well as issues of identity resulting from experiences of colonialism and migration.

Gyatso’s Angel 2007 relates strongly to his ‘Tibetan Idol’ series of 2006, in which various combinations of oil, silkscreen, ink, pencil and stickers on paper, are blended with textual elements and advertising to form the silhouetted image of Buddha — as well as echoing the unsettling image of the Iraqi prisoner tortured by US soldiers at Abu Graib. These works have their roots in Gyatso’s period with The Sweet Tea House group during which he created abstracted, reconfigured images of Buddha as a metaphor for the destruction of Tibetan Buddhist culture and to evade the potentially hostile reception from authorities in Lhasa to more traditionally realised imagery.

The central figure in Angel adopts a Buddha-like pose, standing on a lotus flower with arms extended in a gesture of openness. While the work references the Buddha and mandala of traditional Tibetan thangka painting, in Gyatso’s hands these symbolic and often heavily detailed forms are reduced to shadowy outlines. Replacing the features traditionally ascribed to Buddha are a swarm of brightly-coloured stickers of popular culture items — such as cars, people and comic book figures. This is a contemporary Buddha, replete with the iconography of everyday life, far from romantic and traditional depictions of Tibetan culture and religion.

Scattered around Gyatso’s Angel are further references to the bustling nature of contemporary life. Texts from advertisements and newspaper articles in both Chinese and English combine with mundane lines such as ‘pie and mash’, ‘popcorn’ and ‘buy now, pay 2008’. On a darker note, small drawings of buses with armed guards, street signs, aeroplanes, Amnesty International icons and graphs litter the foreground, reminding us that Buddhism exists in a world of often unresolved conflict and violence. A large symbol to the left of the Buddha — a circle containing the words ‘cut and keep it with you’, outlined with scissor cut-out marks — suggests both the disposable nature of popular culture, and hints at the effects of the Chinese takeover of Tibet and the violent suppression of Tibetan religion and culture. The same ominous cutting-lines surround the figure of the Buddha.

Drawing on his own experiences of dislocation, Gyatso peels away and rebuilds surface details to explore the shifting boundaries and definitions of what it means to be Tibetan in the twenty-first century, developing a unique and multi-faceted visual language. 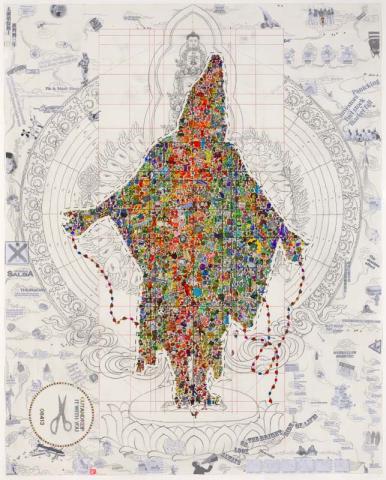