Born in Cape Town, Robin Rhode was raised in Johannesburg where he also attended art school and held his first exhibitions. His practice emerged in response to the physical and psychological environment of the city — engaging, for example, with the urban decay of its downtown (via works executed directly onto public walls and pavements) and reflecting on the street life of a city renowned for its poverty and high crime rates.

Rhode began his art career in 1997 — three years after the election of the National Congress-led government and the end of institutional apartheid. As James Sey notes in the Hayward Gallery’s monograph on Rhode’s work, the political and social freedoms that opened up at the end of apartheid coincided with the advent of the internet and lead to rapid changes in the Johannesburg art scene both in terms of new opportunities for exhibiting locally and increased exposure for artists to the art world abroad.(1)

Rhode works in a variety of media but is best known for photographs and animations documenting ephemeral works made in public spaces. Early works typically took the form of simple chalk drawings, executed on pavements or walls, which served as sets for actions choreographed by the artist. In the animation New kids on the bike 2002, for example, which was included in the 2005 Venice Biennale, two boys are posed in a series of positions in relation to a bicycle drawn on the pavement. The work playfully gives the impression that the crudely drawn bicycle is in full flight while also making a feature of its urban setting — the cracks in the pavement and shadows of overhead powerlines create a form of ‘readymade’ drawing within the work. These early works might be thought of as a hybrid of drawing, performance and urban photography. They set the stage for Rhode’s practice which is marked by its use of extremely limited range of ‘at hand’ materials (generally chalk and urban space) to create highly inventive and affective art works. As Rhode commented in a 2005 interview, ‘Sometimes if you have nothing, you actually have everything’.(2)

In 2002 Rhode relocated to Berlin, where he developed a stronger emphasis on formal considerations in his practice. He pared back his framing and composition of works and introduced abstract geometric forms. While earlier works featured the artist himself as a performer interacting with his own drawings, in these more recent works the performative role has often been delegated to a figure the artist has described as his ‘doppleganger’. Although Rhode has denied any direct influence, the doppleganger’s attire and body language strongly evoke early silent films featuring Buster Keaton and Charlie Chaplin.(3)

Promenade 2008 is a mature work from this more recent phase of Rhode’s practice. It is strongly related to a commission by New York’s Lincoln Center, for which Rhode was invited to produce a visual sequence to accompany a performance of Modest Mussorgsky’s Pictures at an Exhibition by virtuoso pianist Leif Ove Andsnes. Titled ‘Pictures Reframed’, this collaboration between Rhode and Andsnes premiered at the Lincoln Center on 13 November 2009 and is touring to major venues across the United States, Europe and Asia, including the Middle East.(4)

Early twentieth century experiments in geometric abstraction and visual music have been Rhode’s inspiration for Promenade, especially the Russian Constructivists and Hans Richter's film Symphonie Diagonale 1924. In Promenade a solitary figure appears to conjure prismatic forms which in turn give an abstract visual representation of Mussorgsky’s piano suite. Perhaps musing on the nature of artistic practice, there is a playful tension between the protagonist and his creations, leaving us unsure of who is in control. 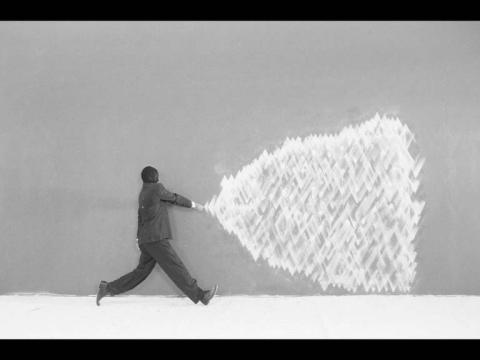