Brook Andrew, a younger generation urban Aboriginal artist based in Sydney, is from the Wiradjuri language group, whose traditional lands encompass a large part of central and southern New South Wales. Many of Andrew’s works, such as Sexy and dangerous 1996 (printed 2002), I split your gaze 1997 and the ‘Gun-metal grey’ series are reproductions of historical images which the artist has slightly but significantly altered. The intent is to re-present generally accepted historical notions and ideas of Aboriginal people or history in an exposé, of sorts, of how prejudiced views from the past have created and informed the divisive social structures within Australia today. Each image reveals how alien and dangerous, yet oddly alluring, Australia and its first inhabitants were in the eyes of the early European settlers. As each of these ideas and images were published they became largely accepted notions.

Andrew’s latest work continues his investigation into early colonial European representations of Australia as a savage or romantic place. Andrew sets out to interrogate these ideas, which still inform some contemporary thinking, by revealing these now scarcely seen early images to a wider audience.

The Island V is based on an image from Wilhelm Blandowski’s Australien in 142 Photographischen 1862, originally drawn by G Mutzel, found in the Haddon Library, Cambridge, England. Andrews’s reproduction of the original image portrays a large kangaroo being brought down by a pack of hunting dogs. Stories from early colonial history suggest that Kangaroos were somewhat feared, and the original German text, which accompanies the image, notes that ‘it has happened that a kangaroo has grabbed a person, carried him to water and submerged him until he has drowned’. An image of an Aboriginal man is incorporated into the background, club raised above his head. His positioning and gesture are ambiguous — is he engaged in the hunt with these imported hounds, or gesturing to the viewer as a warning to intruders on his land? This small and secondary inclusion in the image entangles him and all Aboriginal people in these fantasies of the dangerous, exotic other.

The artist has printed over silver foil, giving the work a luminescence and optical quality which emerges from a rich, bloody, uneven application of smeared red pigment. As a result the work has an added dimension of exoticism, suggesting a strange other world ‘discovered’ by European pioneers.

Brook Andrew’s alluring work adds to a growing body of art by artists engaged in dialogue with and exposé of Australia’s — and by implication, Aboriginal Australia’s — colonial past and the representation of Aboriginal people in Western culture through popular and scientific sources. 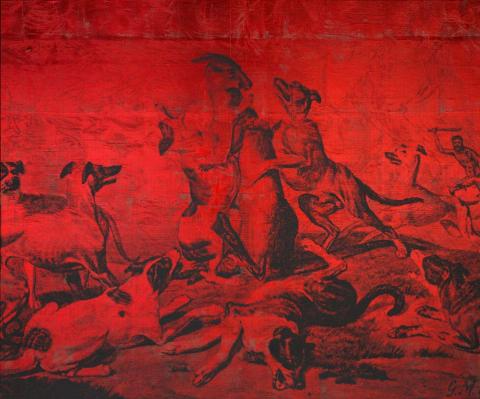