ARTLINES: Dorrit Black's In the foothills 1942

In the foothills 1942 is one of Dorrit Black’s most mature and successful landscapes. It originates from a period of modernist experimentation in Australia, and relates to paintings by artists such as Roland Wakelin and Grace Cossington Smith. It also resonates strongly with Kenneth Macqueen’s modern paintings of the Queensland landscape.

The Queensland Art Gallery holds several delightful works on paper by Black. The Gallery has actively collected modernist printmaking in recent years, with a focus on works by female printmakers, and has acquired three linocuts by Dorrit Black: Chapman's Pool 1935, On the rocks 1935, and Nocturne, Wynyard Square 1932.

In the foothills was painted during World War Two, when Black turned to landscape as a favoured subject — perhaps due to restrictions on travel to Sydney and the protection from the war provided by Adelaide’s isolation. At the time, Black was living in Magill, a suburb nestled in the shadow of the Adelaide foothills not far from her childhood home, and its gentle rolling landscape was her inspiration.

Despite its traditional subject matter, In the foothills is a radical painting for its period. The unusually elevated viewpoint, the lack of a conventional foreground and the boldly rendered outlines of the hills emphasises their treatment as mass and form, with the mountains functioning as interconnecting planes of varying depth.

According to Ian North, the author of Black’s catalogue raisonné, In the foothills dramatically demonstrates that the style of her late 1930s watercolours had matured into a stronger, more simplified approach, while the use of bold lines — recalling her French mentors André Lhote and Albert Gleizes — is closely tied to defining natural forms. While the scene is set during the daylight hours, she derives maximum impact from the shadows cast on the hills, with their dark outlines recalling her training by Gleizes. North writes:

'… the rhythmic forms of the hills are not just described but, as it were, recreated. This work is the most successful to date in asserting and making central Black’s long-standing interest in the tangible reality of natural forms, which are considered as mass and weight as well as visual phenomena.'1

North has also suggested that an organic anthropomorphism can be discerned in the curved shadow and light effects played out in the shapes of the hills. This aspect of In the foothills and several other works of the period suggest Black’s engagement with surrealist ideas, further attesting to her vigorously modern vision. The elevated viewpoint also prefigures a series of linocuts made by the artist in the late 1940s on the subject of air travel over landscapes depicted as flat patterns, some of them during trips to Queensland.

In the foothills is a wonderful addition to the Gallery’s Collection, demonstrating Dorrit Black’s successful adaptation of the lessons of European Modernism to a local subject. The bold colours and rhythmic forms, recalling her training abroad in modern abstract art, are brought to bear on a subject drawn from her personal history and local environment. In addition to the three prints by Black already in the Collection, In the foothills complements a later pastel by the artist, Near my studio c.1951 — depicting the gentle rolling hills flanking the city of Adelaide — which was gifted to the Gallery in 2004 by the poet Thomas Shapcott AO. 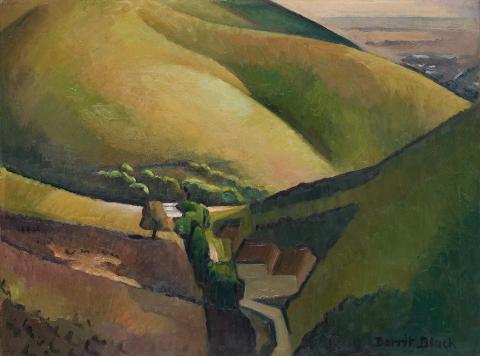