While the Catholic Church remained the dominant authority during the Baroque period in Europe, from the late sixteenth century to the early eighteenth century, power and privilege also distinctly shifted into the hands of royal families and courts in France, Spain and England. For some artists this represented a new form of patronage and a freedom to portray individuals, predominantly nobility, in new and comparatively expressive ways.

Anthony van Dyck enjoyed a short but illustrious career (he died at the age of 42 in 1641) as one of the most sought after and successful portraitists in all of Europe, with particular recognition in England where he was appointed and knighted as court painter to Charles I. A recent major survey of the Flemish artist’s work at Tate Britain, London (18 February – 17 May 2009) examined his work produced in Britain in the service of Charles I. His approach to, and development of, portraiture paved the way for later British painters to excel in the genre, such as George Romney, Thomas Gainsborough, Joshua Reynolds and John Singer Sargent.

Van Dyck was born in Antwerp in 1599 and entered the studio of Peter Paul Rubens around 1618 where he was more assistant than student. By 1620 van Dyck was a talented, confident and successful painter at 21 years of age. The Queensland Art Gallery’s full-length portrait of a man in military dress, Portrait of Marchese Filippo Spinola c.1622–27, was painted in Genoa during a period when the artist travelled extensively in Italy, visiting and working in Venice, Genoa, Florence, Padua, Milan and Rome. He remained in Italy for six years and completed many portrait commissions and some religious subjects. According to Susan Barnes, this period of concentrated work, ‘enabled him to create a new language that was at the same time, grand and natural’.(1) The Gallery’s painting, purchased in 1981, came from the collection of the Fifth Earl of Hopetoun where it resided in Hopetoun House in West Lothian, Scotland. Hopetoun had an agent, Andrew Wilson, purchase the work in 1827 from the Grimaldi family in Genoa.

Genoa has been cited as the city in which his portraiture matured into the influential style for which the artist is best known. Full length portraits tend to characterise this period which depicted their imperial patrons in the grand interiors of their palaces and houses. He also expanded the repertoire of portraiture with the inclusion of children, women as single subjects, family groups, couples and equestrian portraits.

Genoa became a republic, like Venice, in 1508 as a powerful maritime, trading and banking centre. By the seventeenth century the city became a satellite of Spain and bankers to the Spanish Monarchy. Some of the finest and grandest domestic palaces in Europe were built in the city–state with a succession of noble and patrician families occupying key positions of power. The Spinola family was one of a group of aristocratic ruling families in Genoa which included the houses of Lomellinii, Grimaldi and Doria, all of which accumulated extensive collections of art, much of which consisted of portraiture including paintings by Titian, Rubens and Tintoretto.

Ambrogio Spinola, the father of Filippo was elected doge of Genoa in 1621 and was in the employ of the King of Spain, Phillip IV as Commander of the Spanish Forces in the Netherlands and the victor of the famous battle of Breda of 1625 in which the fortified Dutch city fell to the Spanish army. Art historian Professor Michael Jaffé, who advised the Gallery in the purchase of this work, has suggested the painting was made on Filippo’s return from renewed wars in the Netherlands in 1626.(2) A number of portraits of armoured men were completed by van Dyck during this period which also saw the invasion in 1625 by the Duke of Savoy of the Republic to gain access to the ports and seaboard — the gateway to trade. As there had been no previous threat to Genoa, its citizens were caught off-guard and unprepared with the result that many of its upper classes took up arms in defence of their territory.

In contrast to this history however, Piero Boccardo, an historian specialising in the genealogy of Genoese families and the works they commissioned, has disputed the identity of the soldier in the painting as Filippo, son of Ambrogio. His basis for disputation is an etching by Cornelius Meyssens in which an engraved inscription identifies the subject as Filippo Spinola, dated 1674. The subject in the etching also assisted in the identification of a figure in a full-length portrait in the collection of Giacomo Balbi in Genoa dated c.1640.(3) The dates of these examples would indicate that the figure in the Gallery’s portrait is not Filippo, but someone from an earlier generation. In the 2004 publication, Van Dyck: A Complete Catalogue of Paintings, the authors concur with Boccardo’s assertion, adding that the sitter only acquired the name ‘Filippo Spinola’ at Hopetoun House.(4) The same text also includes a work from the collection of the Cincinnati Art Museum, Ohio catalogued as Filippo Spinola depicting an older man in armour, although the museum itself lists the work as Portrait of a man in armour (member of the Spinola family?).

Establishing the identities of the many sitters and models for van Dyck’s portraits from this period is difficult given the complex lineage and familial histories of the Genoese aristocracy. His later British period in the service of Charles I is more fully documented. That van Dyck’s portrait is from his Genoese period is not in dispute, both in terms of subject and style. The identity of the model may emerge from continued research, in the same way that its calling into question has arisen through access to documentation and genealogical research by scholars, particularly in Italy.

A defining characteristic of the Baroque style was illusionism — the successful persuasion of the viewer of the actuality and materiality of the subject. It was emphatic about textures, colours and the substance of things. Unlike religious painting, such illusionism united the viewer and the subject in a shared space and time. The dynamics of Baroque composition — chiaroscuro lighting, strong diagonals and curves, flourishes of painterly virtuosity — all encouraged the acceptance of and participation in the artifice. At this, van Dyck was masterful, in addition to conveying a degree of psychological insight into the sitter. He orchestrated his models’ poses, to emphasise emotional states visible through the body, and captivated viewers with their verisimilitude. In van Dyck’s age portraiture was as much, if not more so, a tangible demonstration of public roles as it was a glimpse of the private self.

This is the third article in a series focusing on selected works in the Queensland Art Gallery's international collection. 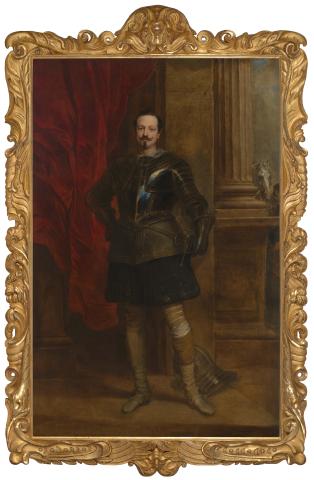