In 1998, contemporary artist Kota Ezawa stopped making films with ‘live’ actors and began working with computer animation. The ‘constructed-ness’ of animation, crystallised for Ezawa a means to critique photography and video as instruments for recording truth. The cut-paper animation style has become a signature motif for Ezawa, and bears resemblance to the seemingly low-tech animation style of ‘South Park’. It has also been likened to Andy Warhol’s screenprints, in the way that celebrity personas are reduced to superficial stylised likenesses of themselves. By paying attention to the processes of image construction, and the implications this has for the manipulation of meaning by the media, Ezawa has developed a singular art practice which he describes as a form of ‘video archaeology’.

The Gallery’s acquisition of Ezawa’s video installation Lennon Sontag Beuys 2004, represents an important addition to the collection of moving image works. Born in Cologne, Germany in 1969 of Japanese-German parentage, Ezawa is associated with the West Coast art of the United States, where he is now based. His videos, slide projections, prints and light boxes often highlight seminal moments from among the visual records of Western history. The moments Ezawa selects for his moving image works are taken from television footage, documentary video and amateur video-recordings, which he then transposes to digital vector-based animations, eliminating the camera’s eye for detail, and instead keeping only the barest content needed for the scene or a persona to be recognisable. By isolating and retaining those telling physical characteristics or mannerisms he, perhaps surprisingly, enables us to look more closely at what is really happening in the scene.

In the video triptych Lennon Sontag Beuys, Ezawa represents iconic moments from footage of three well-known events: John Lennon and Yoko Ono’s ‘bed in’ for peace in 1969, a lecture by media theorist Susan Sontag at Colombia University in 2001, and Joseph Beuys’ Public Dialogue from 1974 at the New School for Philosophical Research. Presented side by side, with their soundtracks playing simultaneously, Lennon Sontag Beuys offers three expressions that negotiate art’s ability to engage social change. Presented by exemplary figures of pop music, aesthetic theory and visual art, Ezawa acts as media editor himself, making these public figures representatives too of three nations whose histories are inextricably linked throughout Western history.

John Lennon and Yoko Ono were married on March 20, 1969, and trading on expectations of massive press attention, decided to spend their honeymoon in protest against the Vietnam War with a ‘bed in’ for peace. Between March 25 and 31, Lennon and Ono stayed at the Amsterdam Hilton Hotel, Room 702, and invited the world’s press to speak with them every day between 9am and 9pm. Ezawa reproduces half a minute from this event, where Lennon explains how the workings of the media establishment can be employed to promote non-violent protest for social change.

Next in the triptych, Ezawa represents a segment from the famous speech by Susan Sontag in which she challenges the notion that art can change the world. Sontag proposes that few images in the catalogue of art history, particularly in respect of photography which records images of pain and suffering, do more than simply acknowledge the presence of that suffering. Rather than merely acknowledging that horror, Sontag asks if art can actually work as an instrument of protest, if it can be a tool to inspire a moral awakening, or is art impotent in its desire to avert injustice?

Joseph Beuys’ first visit to the United States in 1974 was marked by a Public Dialogue at the New School for Philosophical Research, recorded on video by Willoughby Sharp. The famous video shows the artist presenting a trinity of principles: freedom, democracy, and socialism, and Beuys explains that each of these principles are contingent on the others in order to have meaning. Ezawa selects a fragment of this speech where Beuys outlines his thesis, declaring that ‘this new discipline I call social sculpture can be advantageous for the evolution of the earth’.

Ezawa’s looped videos are almost frustratingly short, presented without an explanation or a wider context. The repeating segments are not the same length and not synchronised, so there are almost infinite permutations and correspondences that occur between the messages as the screening time tracks by. By limiting the messages of each component however, Ezawa’s eloquent work allows us time to register that each excerpt has been chosen at the moment when each speaker outlines a position on the power of art and its possibility to effect change. Ezawa has stated that ‘I’m curious to see if, when I show these three distinct artistic personalities simultaneously, they culminate into something new that is all mine’.(1) 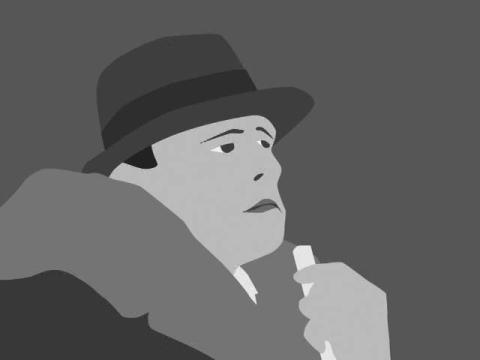