Fairweather was born in Scotland and studied at London's Slade School of Fine Art from 1920 to 1924. Three years later, he left England and spent the next 20 years travelling, visiting places as diverse as Canada, China, Indonesia, South America, the Philippines and Japan. He lived in northern Australia briefly in the late 1930s, and again from 1943. In 1952, he nearly lost his life on a perilous 16-day journey from Darwin to Timor, from where he hoped to be deported to England. Though he did eventually arrive in London, he returned to Australia in August 1953, retreating from society and establishing a new life in a hut on Bribie Island.

Many of Fairweather’s greatest works were produced on Bribie Island. In 1958, he embarked on a major series of biblical subjects, of which Gethsemane is one of the best known. Larger in scale than earlier works, the series conveys a new confidence and ambition in Fairweather’s oeuvre. Strongly influenced by Cubism and Chinese calligraphy, Gethsemane is one of the most powerful of this select group of works, by an artist considered one of, if not the most, important figures of twentieth-century Australian art history.

The Gallery holds a wide-ranging collection of Fairweather’s paintings, from his early years as a prisoner of war during World War One to his student days at the Slade in London, through to his final years on Bribie Island. The gift of this exceptional work, from this vital period in the artist's career, allows for a more comprehensive display and fuller understanding of Fairweather’s achievements.

Along with The Last Supper, Gethsemane was included in Fairweather’s solo exhibition at Sydney’s Macquarie Galleries in 1958. The works so impressed the art critic of the Sydney Morning Herald that he began his review with: ‘A new and magnificent power and scale impresses in the latest Ian Fairweather exhibition’. Gethsemane was singled out for special comment:

In the deeply sombre and large (7ft by 5ft) Gethsemane, the generously moving rhythms of the large linear structures are placed with the quickening combination of the lighter drawn symbols of the theme, while an undercurrent of vibrating smaller shapes sharpens the mood. It is rich and darkly sonorous … (1)

In his biblical works, Fairweather was not emphasising a particular religious message, but rather conveying an aesthetic experience of the subject and the event, claiming a place in the history of great art.(2) Gethsemane depicts Christ’s agony in the Garden of Gethsemane (at the foot of the Mount of Olives in Jerusalem) as he prayed during the night before his crucifixion. Though heavily abstracted, we can see Christ holding the chalice of his great responsibility, appealing to God: ‘My Father, if it be possible, let this cup pass from me,’ as he realises that he is to suffer death so that humanity might be saved. At his feet sleeps one of the disciples, while Judas approaches with Roman soldiers. The principal characters are outlined in blue-black, edged with ox-blood red. Fairweather’s calligraphic lines twist the picture plane, providing depth and movement, increasing the tension within the work.(3)

Gethsemane evokes the great European tradition of religious painting. The work has significant compositional consistencies with early Italian Renaissance incarnations of this scene, which Fairweather would have viewed in his student days on visits to London’s National Gallery. Giovanni Bellini’s The Agony in the Garden c.1465 and Andrea Mantegna’s The Agony in the Garden c.1458–60 both include depictions of the kneeling figure of Christ and the sleeping disciples. As curator Angela Goddard noted: ‘despite the abstraction of its narrative elements, Gethsemane upholds the traditional depiction of the landscape from early Italian Renaissance painting’.(4)

Selected for entry in the 1959 Blake Prize, the outstanding quality of Gethsemane was confirmed by its acquisition in 1961 by Nobel Prize-winning Australian author Patrick White, whose admiration resulted in a visit to Bribie Island that same year to meet the artist. The painting was first hung in White’s bedroom and later above his writing desk. In his biography on White, David Marr observed that ‘Fairweather lived absolutely White’s dream of the artist stripped bare: at the age of 73 he lived and painted in an open hut in the bush’.(5) The painting is also claimed to have inspired White’s epic novel Riders in the Chariot (1961).(6) In a letter from White, penned some years later, to Father Michael Scott, one of the founders of the Blake Prize, he wrote: ‘I am proud to own [Gethsemane], and hope Fairweather will get all the credit he should for having created it’.(7)

Gethsemane is a tremendous addition to the Gallery’s holdings of works by Ian Fairweather. QAGOMA is a major resource for the study of Fairweather and his works, and is committed to the presentation and interpretation of this singular artist. The gift of this significant work from Philip Bacon AM greatly strengthens our ability to do so. 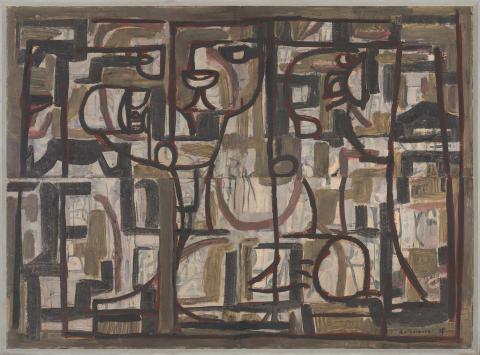