This gift to the Gallery by Paul, Sue and Kate Taylor highlights Arthur Boyd’s artistic process and his approach to the complex ‘Brides’ series. The preliminary study represents one of the most significant narrative cycles in Australian art history, writes Michael Hawker.

Persecuted lovers – study 1957–58 is the finished oil and tempera study for Arthur Boyd's iconic, large-scale work by the same name, held by the Art Gallery of South Australia. Persecuted lovers is among the most highly regarded works in his ‘Love, Marriage and Death of a Half Caste’ series, more commonly known as the ‘Brides’. The acquisition of this study considerably expands the Gallery’s ability to tell the story of one of the most significant series in Australian modernism. It is currently displayed in the Australian Galleries to great effect, alongside the same donor’s previous generous gift of the Sleeping bride 1957–58.

Boyd produced a small group of studies for the ‘Brides’, which reflects the complexity of the series and the artist’s observations about race, sex, violence and love. These were difficult issues to express in 1950s Australia,1 and Boyd’s passionate and conflicting ideas are densely imagined in dream-like threatening landscapes. Franz Philipp has argued that the studies were a way for Boyd to approach the series and to come to terms with the content.2 Persecuted lovers – study zeroes in on the figures with little attention paid to the surrounding landscape, whereas, in the final version, Boyd has added greater detail to the background and accentuated the sky line. The study places the figures such that the tension of the composition is heightened. By condensing the scene, Boyd makes the entangled lovers vulnerable, positioning the menacing figure almost on top of them and brandishing his gun at point blank range.

In the final painting, the bride is clothed, her bridal dress caught around the arm of the shooter as though she is ensnared in a net. In both this work and another related sketch for Persecuted lovers, ‘the Bride is naked, the black-faced "persecutor" wears some kind of tight black clothing … In both studies the painterly treatment is freer and more sensuous’.3 The bride’s eyes lock with those of her killer; her bridegroom protectively embraces her and gazes into her startled face. The bouquet sprouting from his left ear is an image that Boyd drew several times in his sketchbooks during a visit to Alice Springs in the early 1950s. While in Alice Springs, he saw a group of Aboriginal brides being transported like livestock in the back of a truck to be married. It was this image, along with sentiments of unfulfilled love, that would fuel this iconic series.

Boyd clearly rated Persecuted lovers – study highly, as it was included in the historic first exhibition of works from this series at the Australian Galleries, Melbourne, in April 1958. The exhibition comprised 16 large paintings, three studies, a sketch and a ceramic tile.

The ‘Brides’ series is one of the most significant narrative cycles in Australian art history. This study contains a number of key iconographic elements and themes central to Boyd's oeuvre, such as the embracing figures, ill-fated love, sex, violence, death, persecution and redemption, all set within the context of verdant landscapes. Aggressive and confrontational, the painting sits in active contrast to the gentler, more contemplative Sleeping bride. 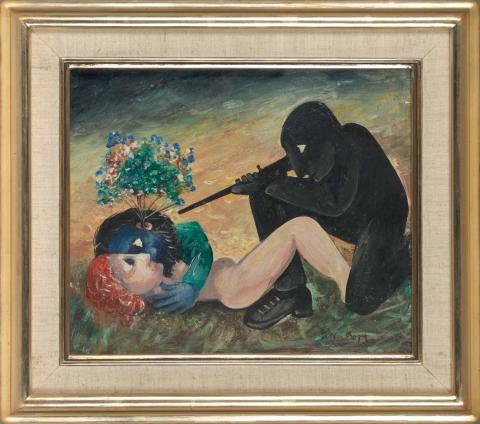