Naomi Hobson is one of a new generation of contemporary Indigenous artists who is already making her mark nationally. Hobson is from the Kaantju/Umpila language group and grew up in the township of Coen, near the Lockhart River community in North Queensland’s remote Cape York Peninsula. A region of extensive lush rainforests, vast open country bounded by snaking rivers and the sea, Hobson speaks of her experiences of a country passed down to her through more than a thousand generations, that is a source of inspiration and gives her ‘the power to imagine & and the freedom to create things’.(1)

Primarily a painter, Hobson first began to experiment with art at the formative Lockhart River Arts Centre, and studied art at college in Cairns before working as a researcher for the city’s Indigenous Library Services, where she become closely involved with new education and ranger programs. Hobson went on to attend the Canberra Institute of Technology, but returned to Cairns, and to art, in 2008, where she studied under painter Julie Poulson and printmaker Theo Tremblay, among others. Hobson began exhibiting works in 2012, and her canvases have appeared in several significant international and domestic exhibitions, including in QAGOMA’s own 2015 exhibition ‘GOMA Q: Contemporary Queensland Art’. Recently, she turned to the medium of clay, and has since become the central figure in the establishment of mainland Australia’s most northerly ceramics program — the Kalan Clay House — based in her hometown of Coen.

The Gallery acquired these two works directly from the 2017 Cairns Indigenous Art Fair, which was the first public display of her new work in clay. Finely hand-built cylindrical structures with tapering necks, the dancing poles are made of ochre-coloured clay, incised through a white underglaze with patterns based on skin designs of circles and triangles. Hobson has said that the pole with the triangular designs indicates journeys — tracks that people follow across the land to meet and celebrate with dance and ceremony. The pole with the circles of various sizes indicates the many meeting places, large and small (or, of adults and children), along these same paths. While the two pieces are individual, together they represent the sharing of culture and celebration through dance and people coming together over great distances.(3)

The best-known practitioner of the Indigenous ceramic tradition in this region was pioneering female artist Thanakupi (Thaynakwith people, 1937–2011), who often spoke of her Cairns-based practice as working with the very sands of her country. Naomi Hobson’s enterprise further north combines her skill in both ceramics and painting with her strong belief in the importance of education and Indigenous heritage. She is set to foster a new generation of art production in the region. 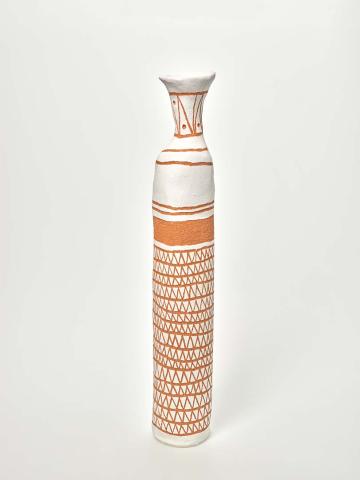 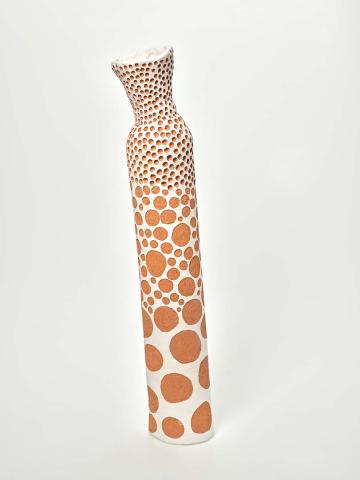