Contemporary artist Rosemary Laing is synonymous with her expansive, cinematic view of the Australian landscape and its history. Although she creates all her works ‘in-camera’, without 3-D computer-generated imagery or Photoshop, her captivating frames continue to push at the edges of imagination. Having earned a prominent place in Australian art during the 1990s, Laing often photographs places that are restricted or remote, and her works subtly engage with the politics of place, ruminating on background events that continue to affect the present. She originally trained as a painter but became interested in photography after recognising its potential

to rearticulate visual language and expression. To me, as a young artist, painting felt like an over-colonized area with a masculine history that didn’t fit what I needed to see . . . Photography . . . of course, has its own set of issues, and is also a troubling framework, yet it still seemed to be a form that offered a more reflexive and reflective relationship with the world of that time.(1)

NASA – Kennedy Space Center #1 1998–99 is one of several works from the 1990s that relate to air travel and flight, and ‘a collapse in the experience of time and space brought about by the acceleration in instantaneous transmission between one point and another’.(2) During this period, Laing was particularly interested in the machinery and physical support structures that enable complex global logistics and international travel. An earlier ‘airport’ series explores these transit hubs as meeting points between the sky and the ground, where human ingenuity defies gravity. Yet airports themselves reveal surprisingly little about their impact on society and are often static, nondescript buildings through which people and objects pass on their way to other destinations.(3)

In NASA – Kennedy Space Center #1, Laing engages the function of these spaces by subtly anthropomorphising the shuttle’s body:

The view from below the underside of a space shuttle receding into the centre-distance . . . suggests a particular cinematic imaginary — the sublime filmic experience of the spacecraft passing ‘overhead,’ a receding into the immensity of the unknown . . .

Machines have become both bodies and ideal image forms . . . [and] the hand-tagged underside of the space shuttle . . . (the tags marking the surface tiles damaged during re-entry) imbues it with a character of a body prepared for surgery.(4)

Laing is similarly occupied with ideas of travel in flight research #4 1999. Here, however, her attention shifts from vehicles and infrastructure to the human body — in particular a white body — and she muses on the experiential dimension more overtly. Surrounded by a blue sky with a gradient that shifts to yellow along the lower edge, a woman in an ornate white wedding dress is fixed mid-air at the top of her arc, neither falling nor climbing. Both the figure and time itself appear to have been suspended. This pause offers the potential for reflection, but given the economy of the scene and its focus on a costume that raises sentiments of belonging, union and tradition, there is perhaps another sense of dislocation at play too. By removing the horizon — the grounding factor — Laing shows how familiar historical constructs of ownership and belonging to the landscape are easily disrupted, and how amorphous identity can become when we look through its scaffolding.

Three years later, Laing’s concern with unresolved history became infinitely more pressing with works such as bulletproofglass #3 2002, in which the reflective quiet of flight research has been shattered by gunshots. Laing’s bride is now wounded and bloodied. As she falls from the sky, out of control, a terrible sense of violation resounds, compounded by the angular forms of three birds surrounding the figure — are they swarming or fleeing? This harrowing tableau recalls Arthur Boyd’s famous ‘Bride’ series with its dreamlike reflection on the complexity of race, sex, violence and love in 1950s Australia. Abigail Solomon-Godeau suggests that Laing is ‘signaling the dashed hopes and heightened expectations of the previous years’, referring, in particular, to a political climate now overwhelmingly marked by fear and self-interest, and leading to a polarised populous.(5)

In brumby mound #5 2003, Laing addresses the landscape and our relationship to it even more plainly, continuing to incorporate related ideas of colonial reach, dislocation and disruption. She creates a sense of culture seeping into new spaces — at once inspired by, but also interrupting, nature — filling an arid plain with items of furniture such as tables, lamps and chairs. Although caked with the same red earth they stand on, their forms are still recognisable. In some respects this leaves them doubly out of place, removed from a home interior to an inland interior. Laing’s strange act of camouflaging household wares is striking and mysterious, with a deeper question underpinning the scene: at what point do these foreign objects join the landscape? At a more fundamental level we might ask, how does a person belong anywhere? How does this vary from culture to culture and place to place?(6)

Similarly, in Drapery and wattle 2017, from the ‘Buddens’ series, she constructs a stream from hundreds of kilograms of discarded used clothing that has been laid out in flowing strips over a river bed. By using fabric as a stand-in for water, Laing appears to remind us of the spectre of drought — yet the clothes also ‘carry the gravitas of the hundreds of bodies that once wore them’. The title Drapery and wattle comes from Grace Cossington Smith’s 1952 still-life painting and references her often domestic view, but also her slow painstaking effort at making an image; one that required long (as opposed to instant) observations and analysis to break up what meets the eyes, before reassembling this stimulus into another language to create an image.(7)

As a final touch to Laing’s intervention, she has scattered leaves to integrate the colourful clothing into the natural environment of the location and to overcome the flattening effect of the photographic process.

Yet there is a deeper history to this particular dry riverbed. It runs into Wreck Bay in New South Wales, named for the numerous colonial-era transportation ships that were wrecked in the area. The sunken ship Hive — carrying some 250 Irish prisoners and a small number of women and children — is one of only three loaded convict ships to have wrecked in Australian waters.(8) Looking beyond the immediate disaster, the site of Wreck Bay was also significant for early contact between the local Koori people and European settlers. Whereas this creek would usually run out to the bay, we might think of it as being flooded by people brought by sea.

Edging towards paradox, Rosemary Laing’s monumental photographs consider the balance between change and integrity, separation and immersion, division and unison. Her theatrical scenarios might question the status quo, but they are no simple protest, nor do they offer any simple unexamined slogans. Laing knows that our perspectives on the past are not easily challenged or even perceived, and so her images make the reverberations of historical events newly visible with sparing turns to the uncanny, drawing us closer to the fullness of reality with her carefully composed flights of the imagination. 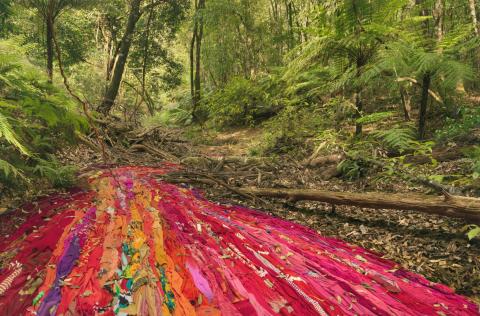 Drapery and wattle (from 'Buddens' series) 2017 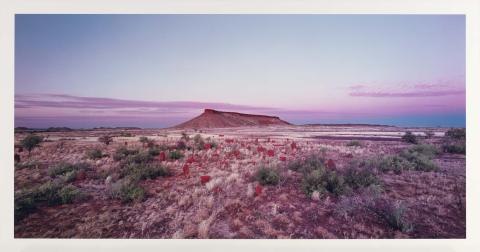 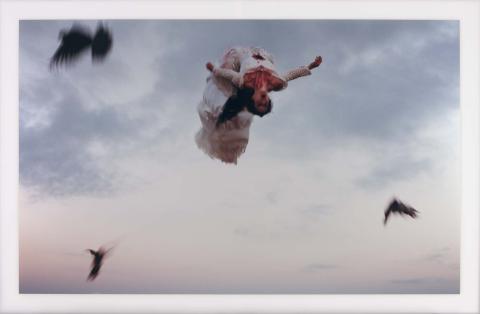 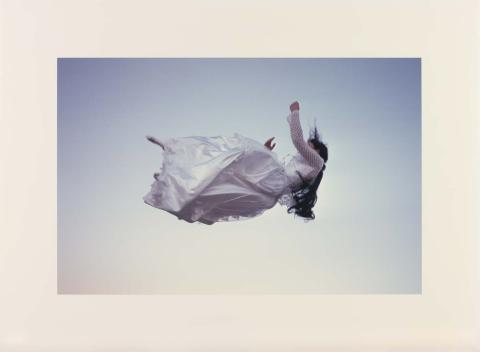