BOONMA, Montien; Salas for the mind

During the mid-1990s Montien Boonma made an important series of sculptures, including Salas for the mind. Salas for the mind, which deals with the relationships between healing and meditation, is a group of helmet-like sculptures that create spaces for the releasing of the mind through contemplation.

Salas for the mind is linked to Buddhist meditation practice in which the mind is trained to conceive a space in which the physical world melts away. Meditation occupies a central place in Buddhism as it provides the discipline needed to attain Nirvana or spiritual release. This act of concentration shifts attention from the physical world to begin to comprehend the nature of reality. Essential to this understanding is the contemplation of the complex relationships between matter and the immaterial. In this way, meditation practice is an interlinked process of attaining Nirvana, the ultimate state of enlightenment that ensures the soul is released from the cycles of birth and rebirth. Some Thais speculate that the initial architectural inspiration for these works might have been the pavilions devoted to healing that were once situated along the great highways of the ancient Khmer empire, which stretched from Cambodia across modern Thailand.(1)

There was a personal reason for Boonma's interest in these healing pavilions: he became vitally concerned with questions of disease and healing when his wife was diagnosed with cancer in 1991. However, the therapeutic practice he had in mind when he created Salas for the mind was not merely physical, but integrated healing of the mind, body and spirit through the observance of both the physical and meditative regimes of Buddhism in its Thai forms. The appeal of these sculptures involves the senses: sight, sound and also the kinaesthetic and vestibular senses, which allow us to orient the body in space. It is therefore a completely engrossing environment.

The structure of Salas for the mind invites the visitor to enter into its embracing space; to become aware of the span and posture of the body, since one must stand carefully within the confined space; and meditate alone. The demands this work makes on its visitors are consistent with other works in the Boonma's oeuvre. Often involving the use of traditional herbs smearing and lining the sculptures, Boonma's works constructed a space in which the psychological/spiritual body was brought into focus via the physical. Boonma consistently explored the sensuality of his material but always as a means of offering a meditation.

The sources of Boonma's images and forms were drawn from deep within Thai culture. Yet the modern materials which he used are familiar to international audiences and resonate as strongly with them as they originally did with Thai audiences. This structure is composed of steel and graphite and is incised with the symbol for 'OM', one of the most commonly used sounds for meditation. Not only is this symbol used in the construction of Salas for the mind but also features in the work Black altar 1995 (Acc. no. 2000.195). This symbol is most commonly seen in Nepalese and Tibetan Buddhist art and is often drawn on the conical structure of a stupa which features the question/exclamation mark-like symbol between stylised eyes. This work, like Black altar, is a play on light and shadow, substance and absence, being and nothingness. In both these sculptures, Boonma explores ideas of balance, illusion and substance - ideas that are also seminal to Buddhist meditation principles. 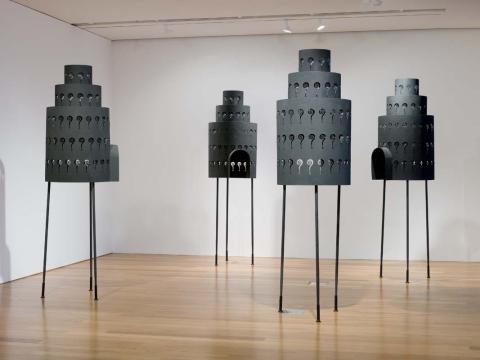