Like many Europeans before her, Mella Jaarsma has made her life far from the land of her birth, the Netherlands. Originally trained as an artist in Groningen, then Jakarta and Yogyakarta, she has lived in Java since 1984. Jaarsma is, to all intents and purposes, an Indonesian artist, since her work takes its cues and concerns from her engagement with the social and cultural life around her. It would be disingenuous, however, not to recognise that Mella Jaarsma is 'Indonesian' in ways that are very different from most of her fellow artists. (Her very presence invokes the daily question: Where are you from? Where are you going? Where are you from originally?) Mella Jaarsma's ethnic and racial origin, her mother-tongue, her early training as an artist - all these bring to her work highly inflected interests and dispositions.

In her work for the 'Third Asia-Pacific Triennial of Contemporary Art' at Queensland Art Gallery in 1999, Jaarsma took up the issues of social location and difference in their most radical and irreducible form. The installation Hi inlander poses these questions: what does it mean to walk around in another's skin, to see through their eyes, to make food with their hands? To eat their food and to become, therefore, like them? More acutely, what does it feel like to live in another's body? And does a different body make a different person? The very title of the work underlines these interrogative meanings: Hi inlander was a Dutch colonial form of greeting to indigenous Indonesians, derogatory in its implications of their colonised status.

The 'second skins' of Hi inlander are made from Javanese gurami fish, frog skins, chicken skin (and feet) and kangaroo hides, and when worn cover the body from head to shin. They resemble the jilbab, the Muslim girl's veil, a traditional mark of Islamic belief which has been much debated in recent years and is undeniably a mark of difference. During the opening night of the 'Third Asia-Pacific Triennial', these jilbabs were worn by performers who mingled with invited guests. The various shapes, sizes and colours of the feet, hands and eyes of the performers have been photographed and are clearly visible in the finished work. These parts of the body permit social contact and interaction, perform collective actions, and ensure travel amongst different peoples. Despite ethnic, age and cultural difference, eyes, hands and feet are the common expressive tools of all humanity.

As an integral part of the work, during the Asia-Pacific Triennial opening weekend there was a communal cooking of meats drawn from the same animals which supplied skins for the jilbabs. These meats were cooked on three versions of contemporary Indonesian stoves, each of which registers in its materials - stone, tiles, zinc - a particular social status. The meats were cooked by Gallery visitors and offered to each other, in recognition of the diverse customs and foodways which constitute human societies. Most crucially, while these foods mark differences and even prohibitions that are ingested with earliest childhood, they insist that difference must be accommodated rather than despised if social harmony is to be achieved.

Hi inlander is thus revealed as an interactive project. For while the jilbabs seem to close off communication, all other aspects of the work invite interaction. The movement of the performers amongst visitors, the cooking and eating of different meats, and even the residues of the performances left in the Gallery afterwards, participate in its dynamic interchanges. What is at first exterior (outside the body) will later become internalised; what lives inside the human heart will finally find external expression. 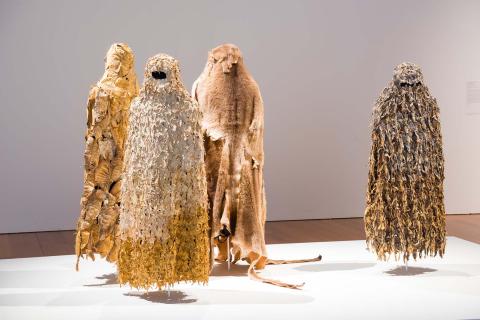