Takashi Murakami was born in 1962 in Tokyo and began his studies in Nihonga or traditional Japanese-style painting before continuing his post-graduate studies. He has a Master of Arts (1988) and PhD (1993) from Tokyo National University of Fine Arts and Music. His undergraduate studies in Nihonga have continued to influence aspects of his current work and are reflected in his careful detail to surface and the construction of the subject in his paintings. From 1994 to 1995 he was in New York at the Museum of Modern Art affiliated contemporary art space, PS1, on an Asian Cultural Council Fellowship. He has since established his position as a leading contemporary international artist.

Mr DOB, a cartoon figure created by Murakami, featured in his three works included in the 'Second Asia-Pacific Triennial of Contemporary Art' at Queensland Art Gallery in 1996. A large painting, a huge balloon and a large, inflatable baseball bat present different aspects of this fictitious personality. Mr DOB's facial features are reminiscent of the artist who uses this character to comment on fashion-media-technology-obsessed generation of Japanese people. Murakami applies his training in Nihonga to his large canvases depicting comic book (manga) imagery. By conflating the refined discipline of a traditional technique with his Mickey Mouse-like creation, Mr DOB, Murakami establishes an intriguing juxtaposition that explores the changing Japanese aesthetic which now embraces a heavily Western influenced commodity culture and an emphasis on the kawaii (cute), while still recognising the cultural value of tradition.

In And then, and then and then and then, Murakami's background in Nihonga bleeds into the technical handling of the work. The painting's subject is a 'portrait' of Mr DOB. This image is one derived from popular cartoon imagery combined with a stylised representation of the artist. It is a finely worked piece, with the face placed at a cheeky angle, subverting the rules of formal portraiture. Quoting the histories of Pop Art such as Andy Warhol's multiples, Murakami has created his very own synthesised cartoon character that touches on the climate of a voracious pop consumerism, layered with references to United States mass marketing and its Japanese equivalent.

Murakami has made a work that seemingly embodies the spirit of meaninglessness and hollow consumption. This is the darker aspect to Murakami's painting. There is a covert sense of commenting on the facile, the shallowness of pure simulation and its ultimate vacuousness. The title hints at this element, presenting a beginning by running the words 'and then' repeatedly and finally giving up on presenting a concrete meaning. Murakami's art practice incorporates a critique of contemporary Japanese culture, through one that is not explicit. 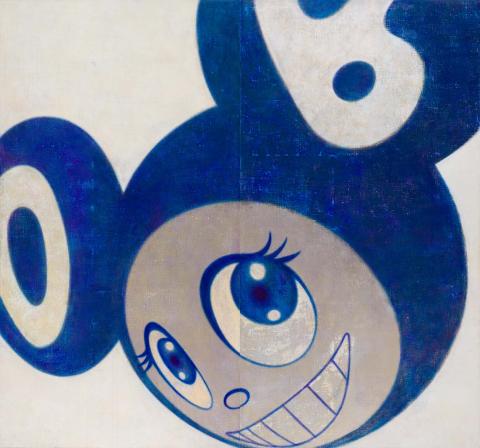