XU BING; A book from the sky

Born in 1955, Xu Bing has lived through numerous political campaigns in China: from the Hundred Flowers campaign of the mid 1950s in which Mao Zedong and the Communist Party reversed their initial stance on free expression, to the Cultural Revolution (1966-76) in which many intellectuals were banished to the countryside to learn 'correct thinking' through labour in the fields, or worse fates. After his parents were prosecuted for being capitalists, Xu Bing was sent to work in the countryside outside Beijing where he spent many evenings drawing portraits of his co-labourers.

After the Cultural Revolution, Xu Bing enrolled at Beijing's Central Academy of Fine Arts (1977). During his studies he witnessed the burgeoning of artistic creativity and expression in which sanctioned guidelines were disregarded and exhibitions of new art were held regularly. Xu Bing belongs to the 'New Wave of Fine Arts' movement that, since 1985, has seen the production of art which overtly denounces political oppression.

Xu Bing's A book from the sky has been vilified by the Chinese government but has also been lauded as the definitive work of the New Wave movement, receiving wide public attention in China and internationally. This vast installation which is composed of reams of paper which mask the walls (like daily papers in China which are pasted up for all to read), drapes from the ceiling and covers the floor in the form of traditionally bound books. The paper is printed with thousands of characters. Paradoxically, all the characters were invented by the artist. The primary process of printing, which is to spread knowledge, has been subverted. Interpreted as an audacious and destabalising political statement, this work infers that political dialogue (which is disseminated in print), is devoid of meaning.

Xu Bing's A book from the sky is a meticulously realised manifesto which, symbolises both aspects of old and the emerging China. While the media and technique are traditionally Chinese, the scale and intent of the work align it with contemporary Western art. 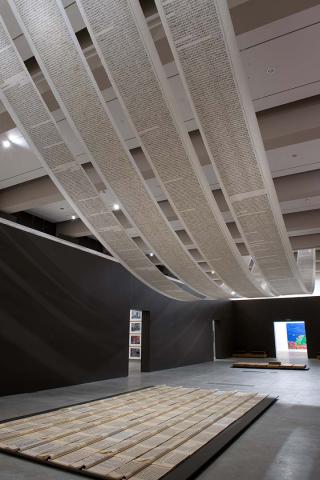