As a contemporary Indian practice, narrative art holds an interventionist place in Nalini Malani's large-scale, powerful 'Mutant' drawings. For the 'Second Asia-Pacific Triennial of Contemporary Art' at the Queensland Art Gallery in 1996, Malani presented the installation Body as site which involved two elements: a series of six large-scale drawings on paper forming the 'Mutant (B)' series sequence and three mixed media drawings made directly onto a gallery wall, titled Woman. The wall drawings provided an ephemeral element and quoted other works being shown at the Triennial, anchoring the 'Mutant' drawings to Asia Pacific geography.

The 'Mutant' series are works that incorporate often contradictory elements and create distorted and disturbing figures, more like an apparition rather than distinct images. These nightmarish figures refer to catastrophic events, including the infamous Bhopal disaster (1984). However, these references are only one facet of Malani's work. Others include her interest in the place of the female body in visual iconography and thought, the subconscious and unconscious world, as well as assumptions and preconceptions regarding gender and the worlds of the marginalised.

Before the first 'Mutant' series, titled the 'A' series, Malini worked on a project which addressed the Greek Classic Medea as a narrative that explored the difficult subject of human violence upon its own kind, and interpreting it as 'a text about colonialism'. (1) (2) The impetus of this search was the local Indian context of increased violence between the Hindu and Muslim communities as well as the general rise in fundamentalist politics around the world and the resultant explosions of intolerance.

The 'B' series is a continuation of Malani's exploration of issues of violence, however this time encompassing wider issues of ecology, the effects of mans disrespect for the environment and the disastrous consequences of nuclear experimentation in the Pacific, especially those that occurred in the Bikini Atoll in the 1950s. Both Mutant II and Mutant III (Acc. no. 1996.216) illustrate human figures whose gender is ambiguous: they could be male or female. They are the disfigured mutants that are a result of a polluted environment where any promise of a future is bleak. They present an image of pathos and grief, shadowy figures without the promise of a fulfilled future. The mutants loom sadly over the viewer reminding us of the plight that has befallen victims of disaster; each work includes an image of the 'other life' that should have been possible. For example, in the drawing Mutant III the central figure plays with two discs, reminiscent of a toy or drum, whose dials are made up of the tiny figures of a girl skipping, emblematic of a childhood activity common around the world. This deeply moving image conveys a situation of grave sadness and is directly accessible and universal in its message.

The place of erasure, as a concept and a method of image-making, plays a vital role in the composition of the 'Mutant' series and the installation of Body as site. For the installation, the wall drawings were made by covering the wall with a layer of charcoal and the phantom drawings made by erasing the black dust. The process is a physical realisation of the communities of people that fall 'outside' what Malani terms as the unarticulated events of history.(3)

An important text referenced in the 'Mutant' series, especially regarding these episodes, is the book Global parasites, Five hundred years of Western culture by Winin Pereira and Jeremy Seabrook.(4) Mutant II and Mutant III feature spectral figures that have been worked over so that the images begin to loose definition, melting and sliding down the surface. They are reminders of a situation that is about 'finding a form for the anxiety, the dystopia that surrounds a new era, where we simply disbelieve the promises of rationalism and where the whole human figure is now replaced by strange, distorted mutant figures.'(5) 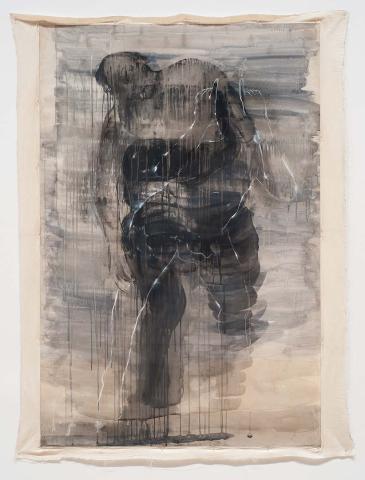