Zhang Xiaogang trained as an oil painter at the Sichuan Academy of Fine Arts, graduating in 1982. He joined a group of young avant-garde artists who came to international prominence during the 1980s and has since been represented in many major international exhibitions. Zhang was a joint founder of the Current of Life painters, and his earlier paintings looked back to the traditional roots of rural Chinese culture to explore human values.

The rapid growth of consumerism in China during the 1990s caused Zhang Xiaogang to begin his series of paintings 'Bloodline: The big family'. In this series, the artist comments on a range of social issues related to the place of the individual within 'modern' Chinese society. Three comrades, from this series, this is not a painting of a standard Chinese family. Zhang's 'comrades' can be seen as belonging to Chairman Mao's great 'revolutionary family', where all individuals were brothers and sisters, irrespective of traditional family ties.

Mao's Cultural Revolution of 1966-77 saw the destruction of many historical icons, including family photographs. Family photographic portraiture was a strong tradition in China, and it is the loss of these precious memories that Zhang Xiaogang addresses in his 'Bloodline: The big family' series.

Zhang creates a sense of nostalgia in his compositions by utilising the conventions of the traditional Chinese photographer. Like his photographic predecessors, he uses dramatic lighting effects and flat anonymous backgrounds to idealise his subjects. In this work, the figures are painted with a smooth pearly finish reminiscent of porcelain, but are lacking in emotion and turn detached faces to the world.

To the artist, these faces are representative of a society striving to exist in an increasingly commodified and dehumanised world. The comrades hide their individual personalities and histories behind the facade of a standardised portrait. Lacking in specific gender, they appear so similar that we are forced to search for subtle characteristics - the turn of an eye or a pair of glasses - that dictate their individuality.

The thin red lines running through this painting represent the 'big family' ties - the 'bloodlines' - that connect the three comrades and bind them together as a group. They are also a link to the past and emphasise that family relationships have always been important in Chinese society. 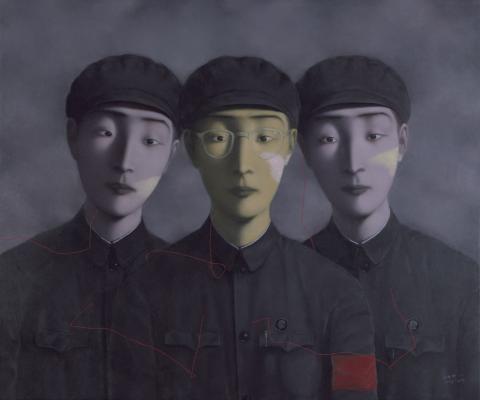