Lee Ufan, who was born in Korea in 1936, moved to Japan at the age of 20 and entered Nihon University: he graduated in 1961 with a degree in modern Western philosophy. While completing his degree he studied traditional Japanese nihonga painting as well as the work of Asian philosophers such as Lao-tze, Chung-tze and Nishida Kitaro. By the late 1960s Lee Ufan had established a career as a critical and active artist, writer and philosopher, disciplines which continue to be interlinked and are vital, related components of his art practice.

By the late 1960s Lee Ufan had formed a set of ideas and critical opinions about the contemporary art of Japan and set about looking for concrete forms of realising these thoughts and ideas. This resulted in the artist's involvement in the formation of the Mono-ha (Object School or School of Things) movement which changed the course of contemporary Japanese art. Mono-ha was constructed around making art which did not attempt to follow the European or American avant-garde per se. Rather, Mono-ha sought to shift the focus of contemporary Japanese art by attempting to present an alternative ideological point of view which acknowledged and recognised a position that was non-Western.

Influenced by both Western and non-Western philosophers, Lee Ufan theorised about the inter-relatedness of objects and ideas, consciousness and existence. Implicit in his theoretical and philosophical ideas is a critique of Modernism (the definition of which included Japan's wholesale appropriation of US economic and political policy in tandem with Japan's authoritarian social systems) and its impact on contemporary Japanese society. In the need to deconstruct the 'monolith of modernism' Lee Ufan applied a philosophical argument that utilised Asian cultural positions. Since World War Two, the rush to modernise equated the development of a highly technologically driven, efficient society. It also implied the alienation of the self from nature, ecological disaster and nuclear threat. In this climate the ideological positions of Mono-ha gave voice to a group of artists actively involved in advocating and reclaiming an art that included another cultural perspective. Lee Ufan writes about Mono-ha: 'I think that the attempt to embrace the outside without appropriating its strangeness, through the artist's strict self-limitation, is based on the idea of coexistence which is not circumscribed by modernity.'(1)

In the early 1970s Lee Ufan began exploring and constructing works based on the original thesis of looking to Eastern philosophical perspectives on the relationships between object and site, existence and matter. The metaphysics of Buddhist, Daoist and Zen philosophies continue to be pivotal in understanding the art of Lee Ufan as are Western philosophers such as Hegel, Merleau-Ponty and Foucault (the latter as voices who were critical of Western thought and are therefore philosophical allies for artists such as Lee Ufan). Painting the infinite could be another way of considering the work of Lee Ufan. Understanding the dangers of 'Orientalising' (the exoticised use of the symbolic and metaphoric oriental motif such as the circle) endemic to a project such as this, Lee Ufan's work escapes this tendency by his strategic choice of material and content.

Lee Ufan's paintings have developed as groups, beginning with the 'From Point' and 'From Line' series of 1971 (finishing in the early 1980s). The series 'With Winds' began in 1987. Shifting from the earlier dense canvas of the 'From Winds' series, this work With Winds 1990 explores notions of the infinite and of balance, challenging the viewer to consider the calligraphic stroke within a framework that is theorised as both modern and ancient. With Winds explores the sensuality of the strident and confident stroke placed amid void spaces. The articulation of each stroke is undisguised, beginning with the weight of the paint at the point and continuing into line.

With Winds articulates Lee Ufan's essential beliefs about his art and the philosophy which drives it: 'Rather than the universe being infinite, I think infinity is the universe, so that the universe is a longing which we can not satisfy. My works are pictorial methods for seeking passage into that infinity. Infinity has always been my motif: in the series "From Point" and "From Line" in terms of conceptual repetitions; in that of "With Winds" in terms of locational developments, where place and an act call forth each other.'(2) 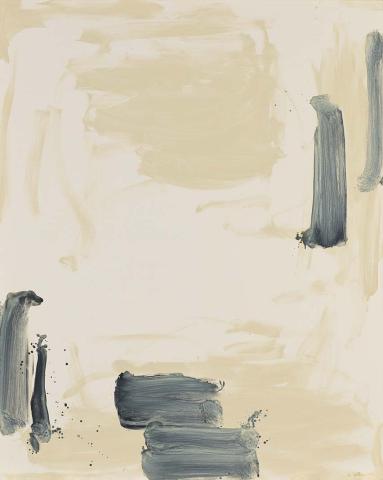