Inspired by Buddhist ritual and language, Lee Mingwei's Writing the unspoken, a project developed for the 'Third Asia-Pacific Triennial of Contemporary Art' at the Queensland Art Gallery in 1999, was reliant upon the personal involvement of the gallery's visitors who were invited to write a letter in one of the three specially created booths. The installation attracted a lot of interest and during APT3 more than 20 000 letters relating to forgiveness, gratitude or insight, were written. In his artist's statement at the time Lee Mingwei stated:

'How often, when we encounter another person, do we leave things unsaid, often the most important things, the things we will carry inside for years afterward, things which are insistent and haunting, yet which remain unexpressed until the ears they seek are beyond reach? The Letter Writing Project provides space and opportunity for participants to express these verbal ghosts. The three booths in the Letter Writing Project invite visitors to reflect and write on three different things - gratitude, insight, and forgiveness. The first will ask the visitor to write about something for which s/he feels grateful. The second will ask the visitor to write about something which has led to an important insight. The third will ask the writer to ask forgiveness from someone the writer has injured, or to offer forgiveness to someone who hurt the writer and still feels guilty about this.

'Within each booth is a writing surface and materials. Visitors will be invited to sit, stand, or kneel at the table and write what is appropriate there. They may then seal it into an addressed or unaddressed envelope, or choose not to seal the envelope so that other participants may read their words. Letters with address will be mailed by the museum; those without addresses will be saved by the artist and later burned in a special ritual. Those letters which are left open will not only provide inspiration and example to other visitors, but will also make clear how common our feelings of gratitude, insight, regret, and forgiveness are. The visitor leaves feeling relieved of an old burden, aware that s/he has helped future visitors to shed burdens of their own, and more a part of humanity.

'I realize that, to Western audiences, the outer form of this project may seem rather alien and Zen-ish, but Buddhism, especially in its Chan and Zen forms, is more a way of living than a religion in the Western sense. Huxley saw this when he characterized Buddhism as "transcendental pragmatism." In the West one encounters many of Buddhism's themes in the writings of Thoreau and the Transcendentalists, in Quaker faith and practice, and in interpersonal, existential, and humanistic psychology. My goal is to give visitors a deep and unexpected experience of certain inner experiences which they share with others, of feelings which are deeply and commonly human. The outer form of those experiences is only a device, albeit a beautiful one, for making this possible. It requires no faith, only the willingness to read, to write, to participate in an unnamed ritual of release.'(1) 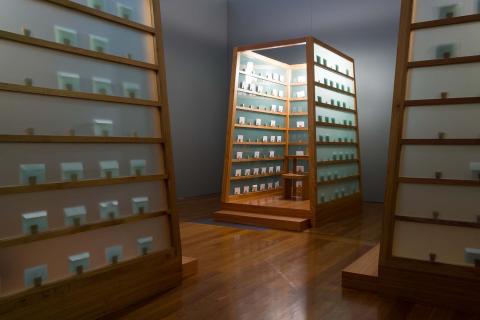