During the 1990s Nalini Malani's work seized upon the sensual landscapes offered by cinema and theatre. She harnessed this sensuality in video installations, as well as forms that take on proto-cinematic aspects, such as the transparent drawings on motorised, revolving mylar cylinders, lit from within to cast moving shadows. Malani has lived in Mumbai since 1956, when she moved there with her family at the age of nine. The pull of the moving image and the powerful cinematic presence in Mumbai suggest a compelling connection by Malani with this form.

Drawing is a key aspect of Malani's work and plays an essential part in her video montages. Her drawing practice ranges from concertina books, artist's books, reverse glass and mylar works that explore immediate environments, to large murals that are also visual components of performance works. Malani is attentive to political cross-currents and deeply committed to environmental issues and histories of degradation, especially where they have been a result of colonialism.

'Mythology' combines with 'India' in an almost canonical association. Those Hindu texts that form one vein of India's coursing mythological terrain include the Vedas, the Sutras, the Upanisads, the Brahmanas, the Bhagwad Gita, and the Puranas, which are rich sources of story, metaphor, image and allegory. The 'Stories retold' series is made up of five paintings on mylar and cites the 'good versus evil' morality stories of the Bhagavata Purana. The Bhagavata Puranas belong to the corpus of Sanskrit legends which are written in verse, the earliest dating back to 300 CE and the most recent to 1300-1400 CE. These cantos exalt the life of the god Vishnu and include tales of Vishnu's many incarnations. The stories that are cited in Malani's 'Stories retold' refer directly to five of these legends and, in particular, to the female figures that offer important moral aspects; figures who today are largely overlooked or forgotten.

Sita (from the series 'Stories retold' series), tells the story of Sita, who was married to Rama or Ram, one of the most venerated forms of the Hindu deity Vishnu. Sita was a model wife and revered daughter of the goddess of the Earth. As myth has it, Sita was abducted by the demon king of Lanka, Ravana, and Rama sent Hanuman to rescue her. On her return to India, Rama required that Sita prove her 'purity' by performing a trial by fire, which she undertook. However, after this first trial, Rama's people continued to request a further trial, to which Rama agreed. When he requested this of Sita she refused and returned to her mother, Earth. In the painting Sita, Malani paints Sita's affiliations with Earth, using a tree branch to map her connection to the succour provided by the Earth.

The five paintings from the 'Stories retold' series are related to Nalini Malani's fascination with the place of mythology in contemporary art and life. Developing ideas that were expressed in the work The sacred and profane, which was featured in 'APT 2002: Asia-Pacific Triennial of Contemporary Art' at Queensland Art Gallery in 2002, these works focus on a series of female characters. In The sacred and the profane, Malani offers the viewer two sets of images: the drawings on the cylinders themselves, and the spectral shadows cast by the light as it passes through the transparent mylar support. These dual images, in which the drawings and their shadows are decisively linked, are of course paralleled in the title, which suggests that the place of the sacred as a cipher for morality is not necessarily as clear as it might seem. This is certainly the case with regard to the metaphysical wisdom that the plethora of Indian mythology has to offer.(1) As with so much of Malani's work, her relentless probing of those very uncertainties attests to a practice which concentrates on the submerged and coercive. 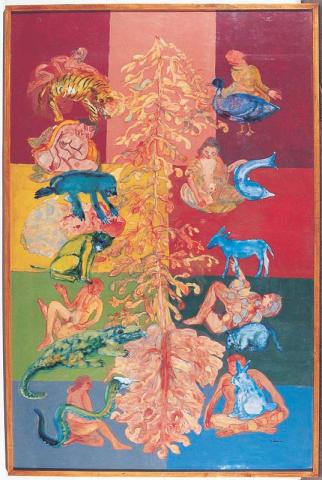