LE, Dinh Q.; The farmers and the helicopters

In his work, American-based Dinh Q LE, addresses important social and historical issues of post-war Vietnam. The farmers and the helicopters was commissioned for 'The 5th Asia-Pacific Triennial of Contemporary Art' at the Queensland Art Gallery in 2006. In this three-channel video installation Le reflects on the disturbing physical and psychological effects from the Vietnam-US War (1959-75), and shows how they continue to permeate the cultural memory and landscape of Vietnam.

While acts of remembrance might reconcile the effects of war, for Le they also highlight a complex exchange between the use of memories to authenticate an experience and transforming or absolving memories as a means of survival. As Le states:

'I am interested in the way nature actively erases both physical evidence as well as our memory of the event. We cannot keep all memories because not all memories are meant for us to keep. The question then is what memories to keep and what to let go of as the way nature intended.'(1)

Le describes how the sight of helicopters extinguishing fires in California reminded him of those he had seen in Vietnam. However, Le is conscious of how his recollections were influenced by popular media, 'he quickly remembered, however, that there had been no helicopters in their region of Vietnam. What Le had remembered from life was, in fact, a scene in the film "Apocalypse Now".'(2)

In The farmers and the helicopters, Le combines interviews with Vietnamese farmers and sequences from Hollywood films dramatising the war.(3) These recollections and images evoke the experience of farmers awed and terrified by helicopters raining down bullets, bombs and chemical agents, but they also provide a complex counter-narrative to the mythologies of warfare depicted in American cinema.(4) The interviews also highlight a generational shift in memories of the Vietnam-US War: older farmers remember the horror of what they witnessed while many younger Vietnamese, like Tran Quoc Hai, elide the trauma of the events by re-signifying the helicopter. A self taught engineer and farmer, Tran recounts his childhood fascination with helicopters, living near an American military base during the war, and the seven years he spent designing and building a functioning helicopter. For Tran the aspiration to fly reflects a desire to assert a modernity otherwise thought not to exist in post-war Vietnam.

Le's emphasis on the present experience of memory takes on a contemporary political dimension. Acts of remembrance work in a local context to give a new significance to the trauma of war and encourage people to reject simple expectations of grief and tragedy. For Vietnamese communities, these acts provide an opportunity to recover what has been lost and demonstrate the capacity of cultures to move beyond the horrors of war with dignity.

4. The Vietnam-US War is regarded as the first major helicopter war. On 11 December 1961, the first US military helicopter unit, 33 Vertol H-21C Shawnee helicopters and 400 crewmen, arrived in Vietnam. Over the next 15 years, approximately 12 000 helicopters were in action. 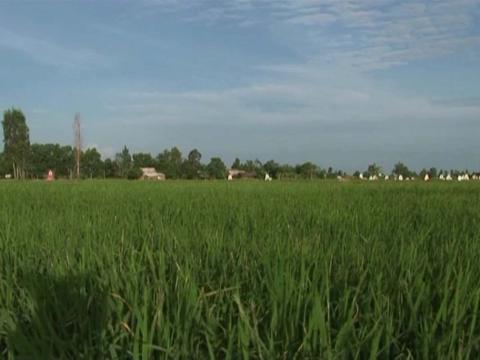 The farmers and the helicopters 2006