Donated to the Collection in 2020 by an anonymous donor, this work by Perth-born artist Abdul Abdullah deftly shows how international affairs can have a personal and emotional impact, writes Ellie Buttrose.

Photographer and painter Abdul Abdullah is renowned for creating portraits of marginalised figures. Abdullah’s practice draws on his own personal journey, having grown up in Australia experiencing intimidation and harassment as a person of Muslim faith and with an Arabic name. In 2014, he made a series of photographs titled ‘Siege’ alluding to the idea of a ‘siege mentality’, which reflected the artist’s psychological state as he had to constantly defend himself and his beliefs in response to the rise of Islamophobia. The result is one of Abdullah’s most emotionally raw bodies of work.

Someone else’s king and someone else’s country 2014, from the ‘Siege’ series, powerfully echoes the frustration that many young Muslim people around the world felt as a direct result of the intense scrutiny and vilification of their identity following the terrorist attacks in the United States on 11 September 2001 and the ‘war on terror’ that soon followed. Speaking about his motivations, Abdullah has said:

I wanted to examine the position of the marginalised, supposedly ‘radical’ Muslim ‘other’, a politicised identity formed in the contemporary West by ‘The War on Terror’. In a climate of fear where radicalised Australian groups like The One Nation Party, Reclaim Australia, The United Patriots Front, The Australian Defence League, The Australia First Party and the Q Society are drawing battle lines in every city in Australia, and the Australian government is exercising radical policies overseas, on our borders, and at home, I have become an unwitting participant in the conflict. As an active participant, however unwitting that position might be, I have an obligation to address inequities that are suffered by the diverse communities I belong to, and to call out the inaccuracies, fabrications, hypocrisies and racism levelled at them.1

While ‘Seige’ speaks directly to Abdullah’s own personal experience, the series is also emblematic of the wider disenfranchisement felt by young people growing up in cultural minorities and/or in low socioeconomic areas.

Pictured against a black backdrop under Caravaggesque lighting, in this series, two figures wearing primate masks (Abdullah and his then partner) adopt defiant poses. Inspiration for the poses and costumes came from news footage and documentation of the 2010 Arab Spring and 2011 London Riots, as well as European films that depict young Muslims such as La Haine (Hate) 1995, directed by Mathieu Kassovitz, and Jacques Audiard’s Un prophète (A Prophet) 2009.2 In these works, Abdullah undercuts the stereotypes of Muslim people perpetuated in the news and popular media.

The simian prop is a make-up tester mask from Planet of the Apes 2001 (directed by Tim Burton) that Abdullah purchased in an online auction.3 With this mask, the artist infuses his artworks with the sociopolitical message of the earlier movies Planet of the Apes 1968 and Conquest of Planet of the Apes 1972, which depicted the fall of democratic society due to the imposition of divisions along race, class and gender lines. Moreover, by picturing these youthful figures as animals, Abdullah also references the degrading language aimed at migrant and religious minorities that reduces their status to subhuman.

In the ‘Siege’ series, Abdul Abdullah deftly shows how international affairs can have a personal and emotional impact. By drawing on his own encounters with Islamophobia here in Australia, the artist addresses the universal issue of being ‘othered’ within society. Yet, what is so compelling about his practice is the way that he brings these complex ideas together in aesthetically compelling artworks, as evidenced in Someone else’s king and someone else’s country. 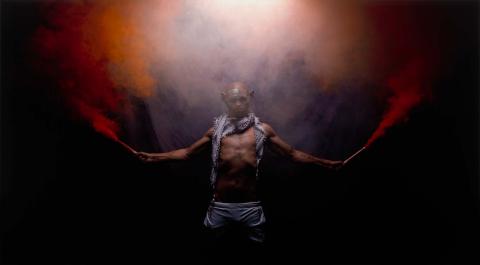