Warning: This article contains references to suicide that may cause discomfort to some readers. Lifeline Australia is available for 27/4 support on 13 14 11 or online.

Although he began as a painter, some of the most striking images by French surrealist Pierre Molinier were captured by the camera. In a home studio, he took graphic images of himself and others that explored sexual fantasies or were rearranged into dreamlike collages. Very rarely did he use colour photography, except for a few images taken in the final years before his suicide in 1976. One of the last images ever taken by the artist shows a bald man in black lingerie, knee-high stockings and a headscarf, posed in a dim, makeshift studio. The figure embodies the paradox of the demure pin-up girl, echoing the tropes of postwar fantasies: he shyly lowers his gaze from the spotlights as a shawl slips from his shoulders to hang loosely from his wrists. In another photograph, the same man wears a sheer, head-to-toe mesh bodysuit and red heels — the mesh suit takes a fetish for black-stockinged legs to the extreme. Twisting his body into a sharp diagonal pose, we are reminded of the static limbs of a shop mannequin, or a fashion model contorted across an editorial spread.

In 1974, Molinier invited Agullo to play one such game. The first session took place on 14 March 1975 and was photographed by then medical student Michael Minard (under the alias ‘Monsieur Flash’).3 Of the 100 images taken that day, a small suite of black-and-white photographs were published in ArTitudes — a radical French art magazine begun by the critic François Pluchart — for the April–June 1975 ‘L’Indécence’ (Indecency) issue.4 The spread, which showed Agullo and Molinier helping each other dress in lingerie, was coyly catalogued as an ‘interview’ between the two artists. After the success of the ArTitudes series, they arranged a second photoshoot almost a year later in February 1976, this time on the theme of androgyny, featuring Agullo’s female alter ego, Thérèse. Molinier ordered garments made specially for Agullo and asked him to shave his entire body (including his head and eyebrows) in preparation.5 Initially, Michael Minard began to take black-and-white photographs as he had done the year before; however, in a burst of creative energy, Molinier soon began to photograph Agullo himself using a 6x6-inch slide, colour Yashica camera. Sadly, he would never see the final photos.6

As well as the two ‘Thérèse Agullo’ studies described at the opening of this essay, the Mackays’ gift includes an image of Molinier — the last in a lifetime series of erotic self-portraits. Veiled in his iconic doll mask, he wears only stilettos, stockings, a corset and shawl. He poses on a stool, genitals tucked between his legs, and holds a shutter release cable behind his back. Yet Molinier is not alone. In the left corner of the room rests a mannequin whose bottom half is turned the wrong way round, absurdly exposing a plastic cheek from beneath her black coat. It is believed, but not confirmed, that this was taken during his first session with Agullo in 1975, as the mannequin looks very similar to the ArTitudes photographs. Indeed, it is hard to distinguish the real person from his plastic approximate on first glance; Molinier might as well be a doll of his own creation.

The artist spoke often of taking his own life and had left matter-of-fact instructions for his tombstone. On 3 March 1976, he committed suicide. His note said, ‘I am finding living a terrible pain in the arse and I AM DELIBERATELY TAKING MY OWN LIFE and I think it’s a real hoot. I kiss all those I love with all my heart’.7 On the landing door outside his apartment, he had written ‘Died 19 h ½. For keys ask the notary Claude Fonsale’ (Fonsale was the concierge).

Molinier bequeathed the original Ektachrome transparencies to Agullo, but just four years later, Agullo himself died in a car accident. The slides were found in the wreckage and, deemed by the police as too indecent to pass onto his family, they were left to his friend, the gallerist and critic Jacques Donguy. Subsequently, in 1982–83, Donguy published five sets of 17 colour prints, each bearing the stamp of Francoise Molinier, the artist’s daughter from a marriage in his thirties. In 1994, Italian publisher Francesco Conz produced a new edition of 11 prints in a slightly larger format.8

At this time, Conz had a surprisingly strong connection to the Brisbane arts scene and was instrumental in building the Gallery’s holdings of contemporary art through several generous gifts. He championed the work of the Fluxus group: a radical movement of socially engaged artists in the 1960s and 70s who created cheap, ephemeral works to be disseminated en masse. Conz was a friend and collector of these artists and published special editions of their work from his house in Verona. In the 1990s, he began to sell through Brisbane art dealer Peter Bellas, and it was this connection that enabled the Mackays to purchase Molinier’s photographs.

Pierre Molinier was an outsider artist consumed with recreating his own image and, through his art, embraced his most deeply held fantasies. Decades later, his works continue to inspire new generations of artists as one of the many contributors to an evolving image of queerness. 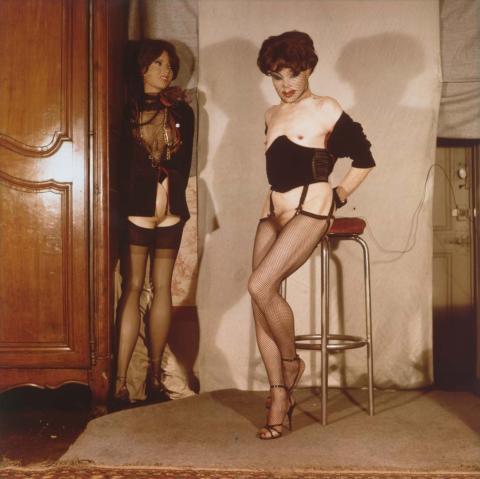 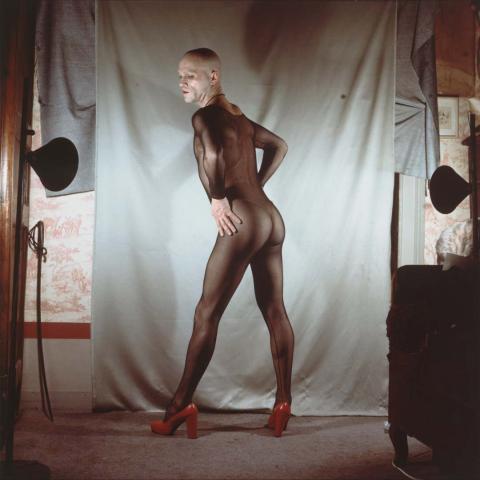