AFFANDI, Self portrait in Kusamba Beach

One of Indonesia’s most celebrated modern artists, Affandi eschewed the conventional figurative painting style that dominated the Sukarno era (1945–65) in favour of a more expressionist approach, squeezing colour directly from a tube and smearing it with his finger. While he rejected traditional representation because it denied him spontaneity, he remained committed to depicting the everyday lives of ordinary Indonesians. Self-portraiture remained a constant in Affandi’s work from the 1940s onwards and his affinities with Rembrandt are widely noted.

This painting is a fine example of the artist's late technique, with a swirling web of pure pigment applied to the canvas and hand-worked to convey not just a personal likeness but also an intense evocation of mood. The head, surrounded by flickering paint and images of demons and a flaring horse, suggests a mind torn by inner torment, with hints of broader unrest. 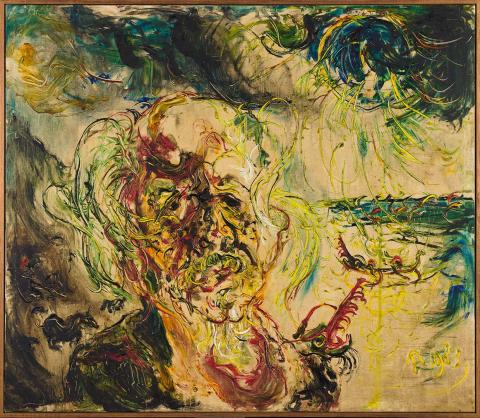