The fourth painting in the 'Stories retold' series, 'Mohini', centres on Mohini, the only female incarnation of Vishnu. In this story, Vishnu takes the form of Mohini to lure the third member of the Hindu trinity, Siva. The Puranas are based on ancient Aryan beliefs and the story of Mohini encapsulates how a Dravidian god, Siva, is carefully drawn into the fold of Hinduism. It is the divine union of Vishnu (as Mohini) with Siva that ensures this South-Indian god is incorporated into the mythology of Hinduism. 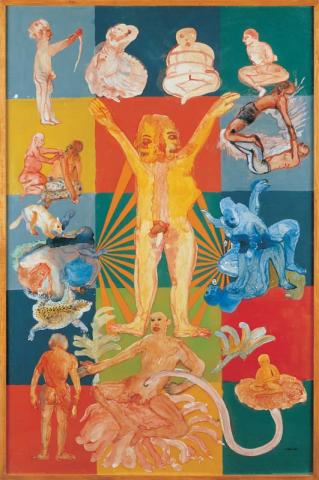