Born and raised in Melbourne, sculptor Ron Mueck is today recognised as being among the most significant contemporary artists working in a realist tradition. His first major outing as a visual artist (having previously worked as a commercial model maker) was in one of the defining exhibitions of the 1990s — 'Sensation: Young British Artists from the Saatchi Collection'. Held in 1997 at the Royal Academy, London, 'Sensation' included works by many of the leading contemporary British artists of the day including Damien Hirst, Jake and Dinos Chapman, Chris Ofili and Rachel Whiteread. Mueck's contribution to this exhibition — Dead dad 1996–97, a sculpture of the cadaver of the artist's father — was considered by many to be the stand-out work of the exhibition. American critic Robert Rosenblum described his experience of seeing this work as 'something both so shockingly real and so shockingly unreal that, like an unexpected trauma, it left an indelible imprint'.(1) In many ways, this seminal early work set the scene for Mueck's practice. Not only did it incorporate the extraordinary degree of realism that has since become synonymous with Mueck's work, but also it declared the artist's interest in the grand artistic themes of life and death. At approximately two-thirds life-size, Dead dad is also emblematic of Mueck's ability to employ shifts in scale, affecting the viewer in a manner far beyond that of the initial shock at the work's exceptionally naturalistic appearance.

Many critics place Mueck's work within the tradition of realist sculpture. American artists Duane Hanson and Charles Ray, who rose to prominence in the 1960s, might be considered influential predecessors for a current resurgence in this mode of sculptural practice. In recent decades artists such as Matthew Barney, Maurizio Catelan and Jake and Dinos Chapmen have, like Mueck, been interested in marrying a high degree of realism with often shocking distortions of scale or deformations of the body.

Mueck's sculptures result from an extremely time-consuming process that requires meticulous attention to detail. He often begins in a traditional manner: sketches on paper and plaster maquettes, which he uses to experiment with the subject's pose and demeanour. For In bed 2005, the next stage involved the construction of a large metal armature, which was covered in plaster and then modelling clay. A silicon mould is made of the sculpture, which is painstakingly prepared by the artist in order to give a naturalistic texture and colour to the skin. Hairs are individually inserted into hand-drilled holes and, finally, finer details such as veins and imperfections in the skin are painted by the artist directly onto the work.

In bed depicts a middle-aged woman who has been carefully composed so that the position of her body and facial expression are highly naturalistic, while also suggesting a range of narrative possibilities. Holding her right hand to her face, she glances upwards and to her right with an expression that could equally be interpreted as apprehensive, wistful or even pining. The pose, with knees drawn up under the bed clothes and head propped up on two pillows, is utterly familiar. At over one-and-a-half metres high and almost seven metres long, the size of the subject has been massively exaggerated. While the viewer may at first be taken aback by the monumental scale of the work, this experience is ultimately tempered by the decidedly unspectacular nature of the subject. The frozen moment of solitary reflection captured in the sculpture belongs to the order of the everyday, eliciting a strong feeling of empathy, in spite of the absurd scale, and prompting us to reflect on the psychology of prosaic, everyday situations. 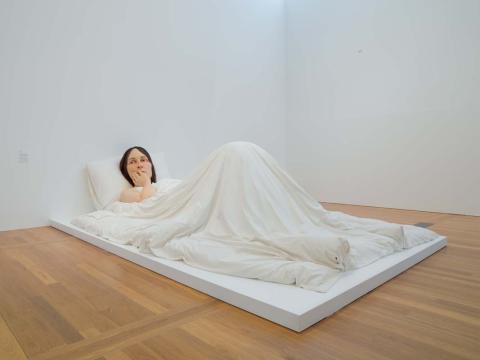