LEE Wen; Journey of a yellow man no. 13: Fragmented bodies...

Lee Wen graduated from LaSalle College of Arts, Singapore in 1990, and continued his study at the City of London Polytechnic, England (1990-92). He has performed and exhibited widely in Singapore and internationally and has been actively involved with the Artists Village, which was instrumental in developing an alternative base for an experimental art practices in Singapore. Lee Wen has taken his 'yellow man' performances around the world - Thailand, Britain, India, Poland, Germany, Korea, Canada, Pakistan, Mexico and Cuba. Art critic Lee Weng Choy has said:

'[T]he fact that he is a traveller bears pointing out, especially since he has become known for his "Journey of a yellow man" series of performances. With titles such as this, the attention is too often on terms like "yellow man", at the expense of those like "journey". But in Lee Wen's work, it is precisely through the process of "journeying" that "identity" is constructed and complicated.

While Lee Wen's iconic imagery may seem rather obvious, what he articulates is a complex and multi-layered negotiation of self-representation. As a Chinese, the all-over yellow paint exaggerates his own ethnicity, but rather than suggesting a straightforward embrace of Chinese-ness, his "performance" of identity is ambiguous and playful. The chains he has used in his performance suggest bondage, but also security. His performing/working with rice could also be seen as problematising the prevalent view in Singapore that what should come first are the practical needs of the people, such as feeding them and providing jobs for them, and only then should Singaporeans worry about such things as "democracy" or "art". Lee Wen's performances refuse these neat separations between art and life, the everyday and the extraordinary, freedom and necessity, and society and the individual.'(1)

For the 'Third Asia-Pacific Triennial of Contemporary Art' at the Queensland Art Gallery in 1999, Lee Wen made a walk as 'yellow man' through the city of Brisbane. As he journeyed from the suburban room via the garden through the washing hung on the hills hoist and into the city the performance was filmed. He walked past the Story Bridge and caught a ferry to the lively Queen Street Mall, past the casino and across Victoria Bridge to the steps of the Queensland Art Gallery. Throughout his journey Lee Wen carried an ox's heart in his hands, which he laid down at the doors of the Gallery and proceeded to open the heart with his hands. As with so much of Lee Wen's performance based work, the local context is of immense significance and provides more than mere backdrop. Rather, the location brings a currency particular and peculiar to itself and Lee Wen's presence operates as a means of heightening locally bound issues. Within the Triennial context, 'yellow man' was a persistent figure of intervention that continually questioned notions of how identities are formed and arrived at.

Lee Weng Choy explains: 'Lee Wen's performances take place in a variety of contexts: from the streets to more conventional galleries and museums. One consequence of this variety is that Lee Wen has to deliberate over how different cultures might read his tropes. For instance, in India "yellow man" has been read as a "sadhu" or "shaman" (holy man), whereas in Thailand, interpretations have ranged from traditional references to religion and the monarchy, to modern "dangers" such as the sex industry and its associated diseases. In other contexts, "yellow man" has taken on an extra-human, even extra-terrestrial dimension. In each case, Lee varies his sub-themes to push the performances beyond racial or ethnic significations.'(2)

2. Beyond the Future: The Third Asia-Pacific Triennial of Contemporary Art, p.130. 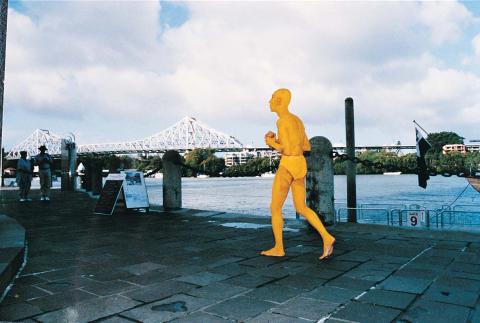 Journey of a yellow man no. 13: Fragmented bodies/shifting ground 1999