Phlegm comprises 1007 charcoal drawings on loose-leaf bond paper, arranged as a grid. The seemingly random sequence compounds the difficulty of unearthing the linearity of what appears to be a tragic narrative. 'Only those who share my torment,' Jose Legaspi says, 'can look at my sketches and be just as lost.'(1) Phlegm seems a completely apposite title for an art work so claustrophobic and dispiriting that it literally takes the breath away. But 'phlegm' has other meanings too - meanings that speak of inscrutability, self-possession, detachment. Legaspi is a trained scientist who once planned a medical career. There are still undeniable traces of that clear, clinical eye: the acute regard of the vivisector.

For all their nastiness and brutality, there is something undeniably beautiful, even serene in some of Legaspi's images. There are small, lost boys; strange other-worldly couples who reach for connection; family groups in lonely rooms. Particularly in the paintings, pain is offset by the hieratic formality of the compositions; by the use of deep, unusual colours that penetrate the otherwise overwhelming gradations of grey; and by beguiling, opaque surfaces.

Legaspi reveals the painful and tragic complicity of perpetrators and victims. He shows us that the human body is not just an object of desire, but also the site of agony and death. In reality, despite its shocking content, this message is delivered in the form of a lament, and every now and then Legaspi hints at the prospect of a faint utopian glimmer at the end of the tunnel. 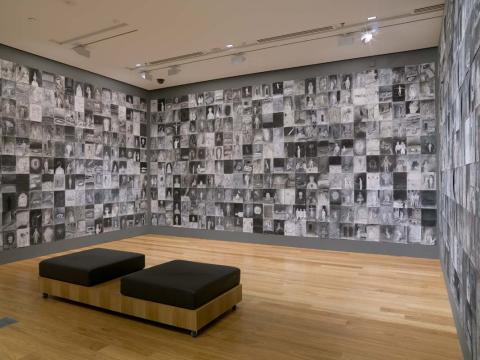