Kozo Miyoshi, born in Chiba Prefecture, Japan, in 1947, graduated from the department of photography at the College of Art, Nippon University, Japan in 1971. Miyoshi has participated in solo and group exhibitions since 1979, particularly in Japan and Continental Europe. The 'Roots' series was shown with the 'Conservatory' series at the Bemis Foundation Gallery in Omaha, Nebraska, 1990. The 'roots', presented as monumental organic forms encased in glass in Miyoshi's photographs (Acc. nos 1996.197-199), comment on a separation of the exterior and interior world and of the 'natural' and 'unnatural'. They are botanical specimens trapped in machine-fabricated containers and their disintegration over time has been recorded in the series 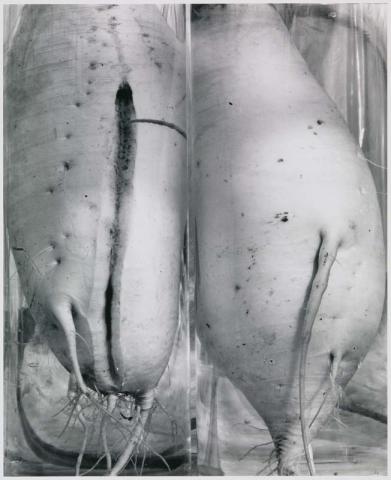