British-born Conrad Martens settled in Sydney in 1835 and established a lucrative career. Fifteen years later, however, New South Wales suffered an economic downturn and Martens visited the Moreton Bay area in the hope of obtaining commissions from his connections on the rich pastoral lands of the Darling Downs.

Martens landed in Brisbane on 17 November 1851, and by 11 December was traversing the steep incline of Cunningham's Gap. This route, the most direct and picturesque from the coast, was also very hazardous. Here Martens, like travellers today, experienced a dramatic contrast between the dense rainforest surrounding Cunningham's Gap and the bright, open Downs.

The dark, oppressive scene he records is indicative of the way early settlers regarded the Australian bush. The novelist Marcus Clarke later described the Australian landscape as primitive and frightening, the untamed opposite of the English pastoral ideal.

The man on horseback is probably Martens himself on one of his two journeys through the area. The figure functions as a symbol of endeavour, about to break through the obscuring bush into the light of a new life. 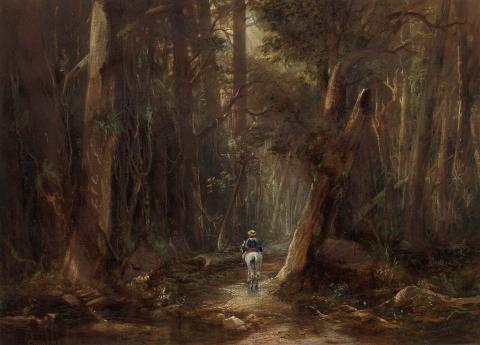